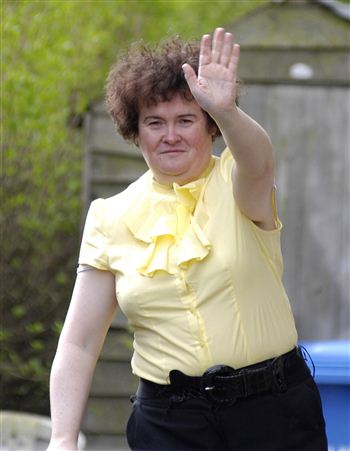 SCOTS superstar Susan Boyle is offering fans the chance to record a duet with her for the next album.

She says the international competition is her way of giving back to those who have made her such a massive success.

On her website, Boyle said: “I decided that I wanted to give someone the opportunity that I had, a way onto the world stage, someone who has talent and just needs a break.

“For me it was through Britain’s Got Talent – it took me years to pluck up the courage.”

Hopeful entrants should record a video of them self singing ‘Silent Night’ and upload it to the competition on Susan’s youtube channel.

Boyle, 49, will personally select the winner of ‘Susan’s Search’, after watching all the entries.

Susan shot to fame after auditioning for Britain’s Got Talent at the SECC in Glasgow during January 2009, and in the past year she has received over 350 million hits on youtube.

She made history when her debut album ‘I Dreamed a Dream’ became the fastest selling of 2009, with 410,000 copies flying off shelves during its first week of release.

She said: “The past year has been a wonderful gift and I wanted to be able to pass that gift on.

“And once I get an idea in my head I am determined to make it happen – as you might already have guessed.

“Not everyone has the confidence or the means to be able to enter a big public competition and so I feel that this way it will afford people the same opportunity but in a less daunting arena.

“I will listen to all the entries and will choose the winner who will sing a duet with me on my next album.”

For more details on the competition visit www.susanboylemusic.com