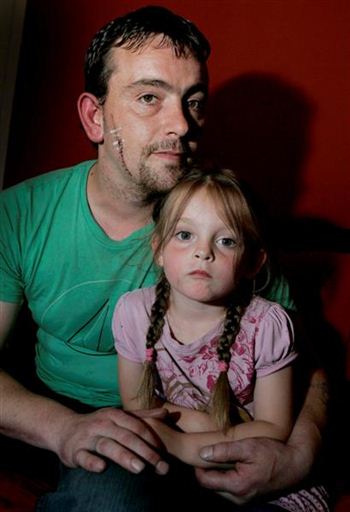 A DAD who had his face slashed in an unprovoked attack says he despairs his young daughter having to see his 10cm scar every day.

Handyman Alexander DeVires took a shortcut through an Edinburgh park on his way home from his sisters’ house when he was violently knifed.

The 34 year-old was beaten to the ground by two men before they took a blade to his face.

The assault came just hours before justice secretary Kenny MacAskill launched a high-profile knife crackdown at another park close by in the north of the capital.

With his four year-old daughter Honey starting school at the end of summer, Mr DeVries worries other parents will judge him for having a gash on his face.

Recalling his ordeal, he said: “It’s not the pain that is bothering me, it is the way my life will be changed forever.

“I am a good man with nothing to hide and no enemies, trying to bring my daughter up into the world in the right way.

“Now she will wake up and see daddy with a massive scar on his face, which is not easy to explain.

“The instant thing people will think is that I have brought this upon myself, which is hard to accept.”

A police source confirmed they had no intelligence to suggest the attack was personal, and appealed for witnesses to come forward.

Mr DeVries told how he was walking through West Pilton Park at 10.30pm on Wednesday when he was set upon.

He said: “It was dark, wet and foggy so I couldn’t see very far.

“It was terrifying getting hit from behind – I had no idea what was happening.

“They took my phone and wallet and ran off.

“I thought I had been punched but I put my hands to my face and it was absolutely gushing.” 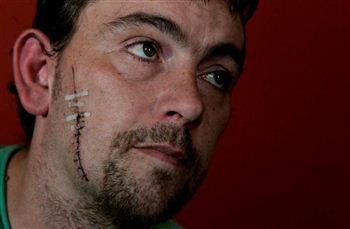 Medics rushed him to the Royal Infirmary of Edinburgh where the wound was stitched and Mr DeVries was monitored until 4am due to his heavy blood-loss.

The following morning, while the victim recovered at home, Kenny MacAskill arrived at another park close to Mr DeVries’ home to launch the No Knives Better Lives campaign.

He spoke of how Scotland’s knife culture was “a blight on some communities.”

He said teenagers in Leith would be the focus of a crackdown on blades.

With 228 knife crimes in the past year, the area accounts for a third of the city’s total blade incidents.

Mr MacAskill said: “Far too many lives are lost and people are injured though mindless acts of violence – often because of the knife culture that blights some communities.

“That is why we are working to change the culture around violence in Scotland.”

Police praised Mr DeVries for giving them a description of his attackers, who approached him from behind.

He says if they find his attackers, he hopes they are jailed for seven years.

He said: “I will happily face them in court.

“I want to see them named and shamed.

“They got a bit of money from my wallet and a phone not worth very much, but I am left with a scar for life.

“People who carry knives are cowards and I hate the thought that the people who did this might have been younger than me.”

Detectives are now calling for anyone who saw the suspects – described as being white, of medium build, and wearing dark clothing – to come forward.

A police spokesperson said: “This has been an unprovoked violent attack which has left a young man needing stitches to a nasty wound.

“As the suspects approached from behind, the man has done well to give us any sort of description at all.

“But the information we have is limited, so we would ask for anyone who was in the area last night, and who may have seen two men acting suspiciously to come forward.

“We would also like to hear from anyone who may have seen the attack as a matter of urgency.”