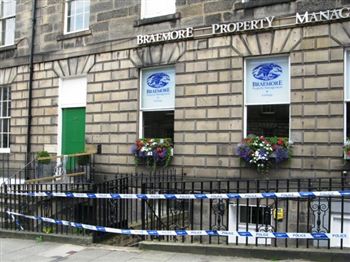 TWO floral tributes mark the spot where a young Edinburgh woman fell to her death on Sunday morning.

The 31 year-old was at a party in the first floor flat in Dundas Street, close to the capital’s trendy George Street, when she is thought to have slipped.

Shocked neighbours said that prior to the horror plunge they had seen some of the revellers climbing out of a window and sitting on a ledge above the downstairs door.

Paramedics found the woman lying in the basement space below at around 2.30am but were unable to revive her.

Police continued their enquiries today but were working on the basis that her death was a tragic accident.

Neighbour Joanne Hartstone, 26, is living in the same block of flats while she works at the festival.

She heard that party goers had climbed out of a window on to a ledge above the entrance to Braemore Property, which occupies the ground floor flat.

She said: “I think some of them went out on to the ledge and she fell from there into the basement.

Joanne, originally from Australia, is sharing the flat with three other people for the duration of the festival.

Many of the properties in the area are rented out for ‘festival lets’ or for student accommodation.

Student Rosie McDonald, 19, lives in the flat upstairs from the one where the woman died.

She said that parties were fairly common in the flat, and that they could also be loud.

She said: “I came home at midnight on Saturday night and the music was pretty loud.

“It was still going at 1am when I went to bed.

“They would have parties from time to time, I think it was a new group of people living there.”

A Lothian and Borders Police spokesperson said enquiries were ongoing.