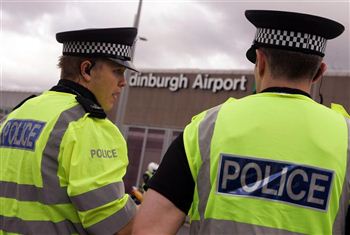 A FULL scale emergency was declared at Edinburgh Airport tonight after a Ryanair flight reported problems on approach for landing.

The plane from Pisa in Italy was due to land at 7.25pm but was delayed mid-air and forced to circle after the wheels failed to come down.

The Boeing 737-800 series was carrying up to 189 passengers and six crew members.

The pilot made an emergency call at 7.39pm, triggering a convoy of fire trucks and ambulance vehicles to stand-by on the Turnhouse runway.

The stricken aircraft circled overhead having lifted off from Italy at 5.25pm.

The undercarriage problem was rectified before the plane landed safely at 7.48pm.

It was ushered into its gate by fire engines which were then stood down along with three Scottish Ambulance Service vehicles.

A fire control spokesperson said: “We were called to Edinburgh Airport after a plane reported problems with the undercarriage.

“We sent four pumps, a height appliance and incident support however the plane landed safely.”

Aircraft bosses confirmed flight number FR2752 had triggered a major response as part of standard procedures for calls from aircraft.

Last night a spokesman for Ryanair said: “Thankfully there is no emergency as far as we are concerned.

“The aircraft performed a go-around as it was coming in to land.

“The pilot decided to go back up to circuit height and went on to land safe and well.”

A spokesman for airport operators BAA said: “It was a Ryanair flight from Pisa but we are not certain of the exact nature of the problem.

“All that matters is there is the emergency services responded as normal and there is no emergency.”

Lothian and Borders Fire and Rescue Service declared the incident “a full emergency” and confirmed its crews had been scrambled.

Lothian and Borders Police and the Scottish Ambulance Service confirmed they were in attendance but did not have to act further.