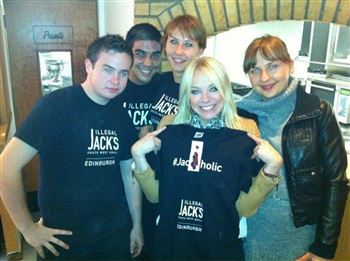 EX-ATOMIC Kitten star Liz McClarnon stunned diners at an Edinburgh restaurant, when she dropped in to grab a bite to eat.

The 29-year-old singer has been in Scotland filming for her BBC Three show Hotter Than My Daughter, and decided to visit Illegal Jacks on Lothian Road.

The Mexican restaurant was tipped as a good place for something to eat by one of the pop star’s followers on Twitter.

Liz and her five-strong crew sat amongst regular customers and festival show-goers and ordered burritos.Jack Grills, chef at Illegal Jacks, said: “There had been some banter on Twitter and she had said she may pop in, but I didn’t expect it.

“The next thing I know one of the team’s telling me that someone looking like Liz had just been up and bought some food.

“We gave her a t-shirt of her visit, she took a picture and that was that.

“The perfect customer and she’s welcome back any time.

Chris Dunn works at the restaurant and said he could not believe he missed the pop star.

He said: “You take one night off and Liz McClarnon visits – typical!”