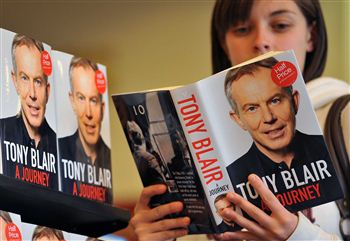 PROMINENT in the window display, stacked in towers in front of Obama ‘Hope’ style promotional stands and perched at eye level above the tills, there was no escaping the piercing blue eyes of former Prime Minister Tony Blair yesterday.

At Waterstone’s flagship Edinburgh store, his 700 page autobiography The Journey, had his face peering from the thick, glossy cover jacket which was in plentiful supply for the anticipated rush to of interest.

But on day one as the doors swung open at the Princes Street branch, shoppers found it had already suffered the indignity of having its price slashed in order to try and encourage buyers.

Red, circular stickers had been carefully tacked to the top right hand corner of the stock proclaiming it was now ‘Half Price’ – selling for £12.50 instead of the recommended £25.

But early on, it still did not appear to be enough to tempt buyers in Edinburgh’s most famous shopping street to pick up a copy.

There was no early morning rush as the doors opened at the West End branch, save the journalists who were on hand for any potential protests or other reaction to the controversial read.

But staff said they fully expected that sales will pick up once people hear about it from the coverage generated in the media and online.

Store manager Colin McGinty said: “It’s one that will become a bestseller and now that it is out, it’s up to people to make up their own minds.

“They can either consume it or condemn it.”

The book, apparently written by Tony Blair himself, reveals all about his relationship with Gordon Brown and Peter Mandelson, the aftermath of Princess Diana’s death and the Iraq War.

The former Labour leader is also donating all proceeds from the book to the Royal British Legion, a decision which has been met with some mixed views.

A few customers did pop in to buy a copy of but others seemed uninterested and many did not even know of its release.

Lisa Hamilton, 21, a law student from Edinburgh University was at the store specifically to buy a copy.

She said: “I’m just buying it to see his perspective on the current issues. I was a Tony Blair supporter and I hope that this book will redeem him in some way.

“I think that it’s excellent that he is giving the profits to the British Legion and I think that it will take away a lot of criticism that has been levied at him.”

Dr Ihsan Kader, 39, who works at the Royal Edinburgh Infirmary, was flicking through the book but he was not enticed to buy it.

He said: “I don’t know what to make of it. It’s a good think that he is not taking the money for it. That would be a bigger crime than anything that he has done already.

“I hope that he will be remembered for some of the good things that he has done and not just Iraq.

“I probably won’t be buying because I don’t like the man. He has done some good things to the NHS but also a lot of bad.”

Other shoppers were picking up their copy to see Tony Blair’s side to the story.

One said: “I just enjoy reading political autobiographies and diaries. I have read Alastair Campbell’s and Peter Mandelson’s but I find it has lowered my opinion of the politicians. I was surprised with the lack if integrity.

“I know that he is giving away the money that he makes and I think he is probably doing it very sincerely but inevitably it looks bad.”

Another commented: “I want to see what he has to say for himself. It is half price and I need a book for going on holiday.

“I don’t think there will be any surprises in the book but it will be interesting how he puts himself across.

“He is giving the money away and he has been criticised for that but if he was keeping it then he would be criticised too.”

A spokesperson for Waterstone’s said that the book is set to become the fastest selling political memoirs.

He said: “We are selling it at half price because big books nowadays always come out with a splash. It’s what we do with huge releases.

“It makes the books more affordable and it is a sign of the books success.

“The book is already doing very well. In a two hour period it is selling eight times faster than Peter Mandelson’s.”