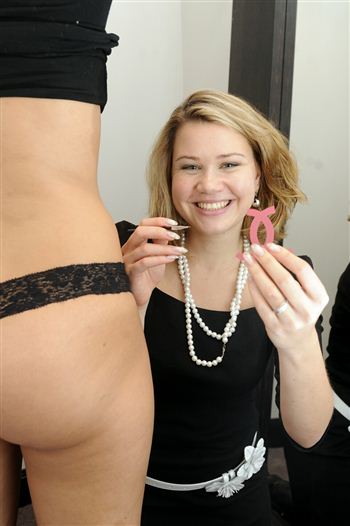 AN Edinburgh beauty parlour has become the first in Scotland to offer women designer bikini line waxing – and is being described as the ‘ideal treat’ for special occasions.

The new ‘bikini designs’ allow ladies to pick and choose any shape or symbol they like, which are then stenciled on and dyed to create the desired look.

Costing upwards of £45, the idea was brought to Scotland by Russian businesswoman Anna Brown, who says the fad will be hugely popular with girls in their 20s and 30s.

The 27-year-old set up shop on Frederick Street two weeks ago, and believes it is the ideal treat for hen nights, weddings and holidays.

“Or you could add a few diamonds for a very discrete private treat.

“We’ve had two ladies who have had it done since we opened, and a couple more bookings.

“The ladies that had it done didn’t come to us especially for it, but they saw it on our price list and had to have a go.

“They didn’t quite scream when they saw it, but they were very excited.

“Their reaction was ‘Oh my God! That’s amazing’.”

The designs are crafted firstly by using a normal waxing technique, and then they are tweaked with stencils and dyes to create the specific look requested.

After moving to Edinburgh three years ago, Ms Brown adopted her partner’s last name in place of her real Russian surname Kishchenkova.

She said most of her inquiries have come from women in their 20s and early 30s, but she anticipates that the popularity will grow amongst other age groups.

She said: “After a certain age you have to think of new ideas to spice things up, but people get it done for all kinds of reasons.”

The beauty parlour – RBFY – is thought to be only the second in Britain advertising the unusual designs, and Ms Brown said she has had an encouraging response from the business community.

She said: “I expect there’ll be lots of ladies out there who will want this done.

“We’ve only been open for two weeks so we’re waiting for work of mouth to spread, but we’ve had a great response from the business community.

“I’ve been to a few networking events with Edinburgh’s Businesswomen’s Club, who said it sounds like a fantastic idea, and also something they would fancy doing themselves.”

Caroline Buchan, president of the Business Woman’s Club, said: “Anna has brought an innovative business service to Scotland’s capital and we wish her the best of luck with the venture.

“Early feedback from club members has been a mix of intrigue and excitement.

“The female of the species do enjoy pampering themselves and this service brings an original niche within which the businesswomen of Edinburgh can indulge.”