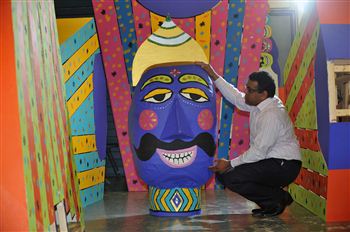 SOME of Scotland’s hardest prisoners have helped create giant 40ft effigies to be torched to mark a major Hindu celebration this Sunday.

The colourful figures are for a parade marking the Indian festival Dusherra held Edinburgh this weekend.

Dusherra is a Hindu celebration of good conquering evil, telling the story of Lord Rama, who defeated the demon king Ravana following a 10 day war.

Inmates at the Edinburgh jail were given the chance to build woodwork models of Rama and the demons from scratch, which have taken them around four weeks to complete.

Craig Widowson, a prison officer and project co-ordinater, said: “It is a way of them learning different skills and about another culture, as well as letting them be involved in a celebration of good over evil.

“Doing something productive like this makes their day go in faster, and gives them something to focus on while they all muck in and get on with it.

“The more community projects we are involved in the better.

“It is their link to the community – doing something good – it is so beneficial because there is often not much good that comes out of prison.

“This has definitely been one of the more popular projects amongst the prisoners, and I have found that when they do something for the community, they are much more likely to take care of it when they get out because it instills a sense of pride.”

The parade will begin at Edinburgh Castle at 6pm on Sunday, making its way to Calton Hill, where the brightly coloured effigies will be set alight.

The festival is a popular event on the Hindu calendar, and Karthik Subramanya, president of the Scottish Indian Arts Forum, said effigies much like those made by the prisoners will be being crafted across India in anticipation of the much-loved festival.

He said: “There are dozens of parades happening in every nook and corner of India this weekend, and I am proud to be helping organise one in Scotland.

“We have been celebrating the festival in Edinburgh for about 15 years now, and it really does bring people from all different cultures together.

“In previous years we have had around 15,000 people turn up to the parade, and I estimate there are only around 1,000 Indians in this part of Scotland so the people attending must come from many different cultural backgrounds.”

Saughton Prison – where Peter Tobin is serving life sentences for the murders of three young women – has served the city since 1920 and has a capacity of 643 cells.

Around seven prisoners at a time have been working for anything up to five hours a day to build and paint the models, and have been assisted along the way by Mr Widowson, who has a background in joinery.

Jackie Clinton, head of prisoner outcomes, has been overseeing the project, and said it is an opportunity the prison welcomes.

She said: “It allows the prisoners to pay the community back for the harm that they have done.

“It also integrates them in a small way with the community at large.”

The SIAF was established in 1994 and is a cultural organisation which works to build relations between Indian and Scottish people, and receives funding f 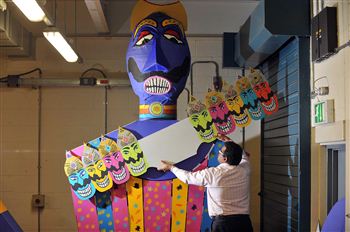 rom the City of Edinburgh Council.

Sunday’s parade will also include bagpipe bands from schools around Edinburgh, and the Lothian and Borders Police band.

When it reaches the top of Calton Hill, theatre students from the University of Edinburgh will put on a performance telling the story of Lord Rama, followed by a fireworks display as the effigies are being burned.