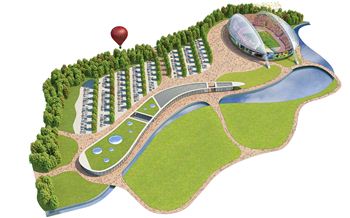 HEARTS fans have given mixed reviews to the possibility of their club moving to a new 25,000-seat stadium which would be shared with Edinburgh Rugby.

The proposal has been made by former Rangers tycoon Sir David Murray’s property company Murray Estates, which is proposing to build a multi-use sports stadium on a 600-acre green-belt piece of land near Edinburgh Park.

The company is discussing the plan with both Heart of Midlothian Football Club and Edinburgh Rugby.

Jestyn Davies, managing director of Murray Estates, said the model would be comparable to Liberty Stadium in Wales – where football team Swansea City shares the ground with Magners League rugby side the Ospreys.

But Thomas Harris, secretary of the Bonnyrigg Hearts Supporters Club, said the move could impact on local businesses in the Gorgie area.

Mr Harris, 42, said: “I have heard about the proposal and I think if it was going to benefit Hearts in the long-run I would support it, but there could be a lot to lose by moving.

“It would be a real shame to move it from its current spot because there are so many fans in the Gorgie area.

“A lot of businesses rely on football traffic every couple of weeks and they would certainly suffer if the stadium was no longer bringing people to the area.

“It would probably bring a new breed of supporters living near the new stadium, but I would prefer it if Hearts stayed at Tynecastle and just got a new stand put in.”

And Alex Jones, 60, the general secretary and treasurer of Danderhall Hearts Club, said: “I personally have no complaints, but the move will depend on whether or not manager Vladimir Romanov decides to stay with the club, as I know he is opposed to moving out of Tynecastle.

“If he wants to leave then there will be nothing anyone can do to stop big changes like this one.

“The club is called Heart of Midlothian – it is not just a Gorgie side – so that should not be any basis for keeping the stadium in that area.

“I’ve been a Hearts supporter for 45 years and since then every week I’ve had to get a bus to the home or away games – so it will make no difference to a lot of fans like me who already travel.

“And if it’s going to make the club more financially stable them I’ll be all for it.”

The proposed stadium is part of a £1 billion master plan being drawn up for Edinburgh’s “Garden District”, which will also feature 3,500 homes and a visitor attraction called The Calyx.

A series of workshops got underway today (Tue) to draw up detailed plans, with input from businesses, developers and community groups.

On Thursday officials from both Hearts and Edinburgh Rugby are expected to represent their respective clubs at a discussion about the new stadium.

The workshops are being held at Murrayfield and are expected to last all week, with plans being adapted depending on the feedback given.

No one at Hearts was available to comment, and the extent of their interest in the proposal was unknown.

The stadium had originally been set to undergo an extension, but three years after it was first announced no progress has been made.

Mr Davies said: “There is a sporting deficit in Edinburgh and we believe there could be a regional stadium within this site.

“We are speaking to Edinburgh Rugby about this and there is another major football club in the west of the city that may be interested.

“What we suggest is that you look to Swansea, where Swansea City and the Ospreys co-exist in one stadium.

“It can also bring considerable savings.”

A spokesman for Edinburgh Rugby said: “Representatives of Scottish Rugby will be present to learn more about the proposals.

“We will monitor the situation closely.”