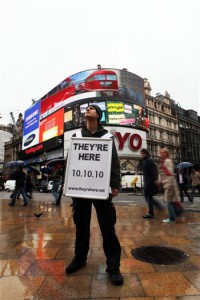 A SMALL Scots charity has scored a smash hit online after duping thousands of sci-fi fans into thinking legendary film director Steven Spielberg was working on a new project.

Animal protection charity, Onekind, reaped rewards from its viral video campaign that had sci-fi fans across the globe on tenterhooks for a project that they thought bore all the hallmarks of Spielberg.

Intrigue was fuelled further by the fact that actor, Angus MacInnes, who played the Gold team leader in Star Wars appeared in the teaser.

The movie – ‘They’re Here!’  – was accompanied by a new website and a fictional social networking profile was set up on Twitter and Facebook in a bid to generate interest in the film.

But yje six minute film was in fact sci-fi hoax and a ploy to raise awareness to the charity’s cause of improving animal rights while also support the organisation’s re-branding from Advocates for Animals to Onekind.

As a result, the charity says it has seen a dramatic spike in interest across their multimedia platforms since October 10, when the film was released.

Onekind’s web and publications manager, John Robertson said: “Our website has had a 300% increase in web traffic from same period last year with hundreds of people signing up online to be part of the OneKind movement.

“We have acquired an additional 500 Facebook fans since launch, most of whom are actively contributing to the page by ‘liking’, commenting or sharing content and new followers on Twitter @onekindtweet.”

“In carefully targeting distribution of trailers and teaser clips, we managed to create the illusion that Steven Spielberg and J J Abrams were involved in the film.

“This gained many new followers, who have explained that they were pleasantly surprised by the outcome of the film.”

He added: “People were desperately trying to find out what it was about.  People were even translating the alien text that we had included in the trailers.

He added: “Some 900 people signed up to the website alone to receive an e-mail link to the film, 60 to 70% of those were from America, the rest were from Europe.”

The thriller styled film was actually made by local filmmakers, including Scottish Bafta winner, Matt Brown, and his colleague David Lumsden.

The film draws parallels between the perception of aliens and aliens and depicts the anxious build-up to the arrival of an alien species.

The fake television news anchor reads: “Film and pictures appear to show them eating, playing and looking after their young.

We’re learning that just like us they have feelings of pain, distress, joy and happiness.

“Clearly we’re not that different.”

Despite being misled by the true nature of the film, viewers appear to have had a positive response via the Onekind website and social media.

Hugh C McCaw said: “What a wonderful world it would be if we spent more time embracing the amazing animals we are surrounded by and the complexity of life forms we have, rather than exploring other planets for new species we can destroy. Wonderful film!!”

Sue Baumgardt said: “Excellent – obvious really, if only people would wake up and look.”

Mr Robertson said: “I suppose what we are trying to do is to appeal to a wider audience.  We want to show that animals have rights but the people who have followed us already agree with that.

“We’re looking for a small change in a greater number of people, that small change could make a big difference.”

He added:  “Our message in the film is the same as our charity, Humankind. Animalkin. Onekind.”

“People are really connecting with the film’s message that if we are looking for other intelligent life forms, we need look no further than the amazing animals with whom we share the planet.

She added: “Judging by people’s responses and the statistics we have, the film has fulfilled this role. We even made a few friends in the Sci-Fi community along the way.”