The Essex crooner said he loves it here because Scots have always given him a “fantastic welcome”.

Attending an awards bash in Edinburgh, he said: “To be fair I’ve always had a fantastic welcome when I come up here, and I’m really grateful for that.”

“I love Scotland, I think I’ve come up here more than I’ve been at home.

“That’s not even a joke and I’m definitely going to be moving here in the New Year or definitely getting  a place up here anyway.”

When asked where would like to buy a home, he said: “I don’t know, I think I’ll have to ask the locals.

“I need a bit of guidance as to the best place to stay in so, we’ll see.”

Murs, who was at the Radio Forth Awards in Edinburgh, added: “I’m deadly serious, I love it up here.  I’ve had a great time.  The weather could be better I must confess.

The 26-year-old singer was particularly complimentary about the Scottish drinking culture.

He said: “For example today, 4pm and they’re all downstairs drinking having a great time.

“And certain people don’t do that, [they say] ‘we only drink in the evening’ but I feel that with the special Scottish people they really love having a good time and I think that I’m that type of character and that’s why I love them and why I think, I hope, they love me for being the same type of person.”

Olly performed at the Radio Forth Awards on Thursday where his appearance on stage was met by screams of delight from the crowd.  After his performance he spoke about life since he finished as the X Factor runner-up to Joe McElderry last year.

He said:  “For me it’s been an amazing turn around in my life you know from working in a call centre to what I’m doing now.

“But I thoroughly enjoy everything that I do, I really do.”

Olly also admitted that he’s hooked to this year’s competition but doesn’t know who will win, he said: “There’s so many great artists left on it so we’ll see.  It’s going to be an interesting couple of weeks.”

Asked if he thought any of this year’s competitors were competition for him within the industry, he said: “Well if you look at their style compared with my style there’s not really anybody you can compare to me.

“I don’t feel there’s anybody on there that will do the same music in the same style and dance like I do.” 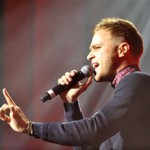 Misspelt Rangers shirt to be auctioned for charity