Mammoth salt delivery arrives as Scotland battles against the elements

SNOWBOUND Scotland took delivery of a giant supply of salt today (mon) to help with herculean efforts to get the country moving again.

Some 26,000 tonnes of grit sailed into the Port of Leith before leaving on a convoy of trucks just as the country’s main commuter arteries slithered to a halt.

It was destined for gritter depots up and down the country to replenish efforts of snow plough drivers and spreading teams working round the clock against the elements.

But hundreds of motorists found themselves stranded on busy routes including the M8, M9 and beyond as lorries jack-knifed and broke down, trees fell and blizzard conditions reduced traffic to a standstill.

Train services were also severely disrupted in all directions, bus companies were forced to scrap routes entirely, while flights from Scotland’s busiest airport in Edinburgh were left grounded.

Thousands of school-children across the country found themselves with the day off as schools shut their doors.

While the business community – already reeling from the recession – was expecting to lose millions as staff and customers were left unable to make it to work.

Almost 26,000 tonnes of salt were delivered to the Port of Leith in Edinburgh and greeted by Transport Minister Stewart Stevenson who was at the Leith docks when the shipment arrived.

Mr Stevenson said: “The Scottish Government, councils and other key services across Scotland pulled together last year to deal successfully with the coldest winter since 1914.

“We are confident that we have planned well ahead with our operating companies and local councils to keep Scotland moving during this brace of cold weather.

“While there is no suggestion yet that we will face similar conditions to last winter, we have ensured  lessons learned are already being put into practice as can be seen here at Leith today.

“With the arrival of this extra salt to supplement our existing stocks, over two months supply at heavy use, we are well placed to tackle winter head-on.

“The Scottish Government’s Resilience Committee will be kept informed of developments over the next few days with a view to convening again if necessary.”

But drivers and passengers were urged to play their part by making informed travel choices as extreme weather conditions caused chaos in central Scotland on the roads, in the air.

Heavy snow and icy conditions had a dramatic effect on commuting traffic in the central belt.

The M8 – Scotland’s main road artery – was gridlocked for prolonged periods of the day and reduced to one lane at other times as lorries jacknifed and broke down at various locations.

Traffic Scotland reported that vehicles on the busy A9 were ground to a halt in both directions between the Broxden round-a-bout in Perth and the Keir round-a-bout at Dunblane.

North of Perth towards Blairgowrie, a number of roads were also left closed either due to the dangerous driving conditions or as the result of fallen trees blocking the road. 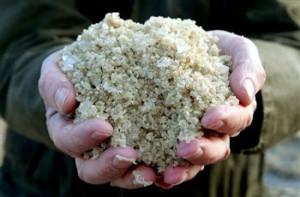 In Fife, the A909 was also closed because of a fallen tree, while snow and ice were reported to be affecting all routes in south east Scotland.

Staff at the Forth Road Bridge was also issued with a skid risk and the A1 at Berwick upon Tweed was closed in both directions.

The RAC said conditions were atrocious and expected to get worse, hampering efforts to rescue stranded drivers.

A spokesman said: “Our concern is that the situation could get worse, forecasts predict blizzards which will cause more problems for drivers.

“No sooner will the roads reopen than we will experience more bad weather.

“It is pretty bad, there are localised hot spots and we endeavour to get to people as quickly as we possibly can.

“But we are experiencing the same conditions so we ask that customers remain patient.

“We advise that you travel only if absolutely necessary and listen to local radio stations for travel updates.”

Glasgow Airport opened as normal but BAA said Edinburgh Airport has been closed since 3.45am while airport staff cleared snow from the runways.

Spokesperson Gordon Robertson said: “We are working hard to clear the runway.

There has been a tremendous amount of snow.  Falling over night, snow showers have been continuing all morning.

“We are working very hard to clear the runway to make it safe and hope to get some flights going later today.”

One tweeting passenger, @tinarett, travelling to Prague this morning from Edinburgh had their flight cancelled and had to reschedule her flight over the telephone and reported that she was charged 10p per minute by Jet2 to do so.

Another passenger, @kronos1126 arrived back to Scotland from New York and was looking forward to a quick drive home from Edinburgh, but landed in Glasgow and was bussed over to the east.

Dundee Airport was closed due to snow cover on the runway.  A spokesperson for the airport said: “Ploughs are out clearing the runway but as soon as it clears the snow just covers it again.

“No flights have been cancelled but there are flights to London and Birmingham that have been delayed.  They were supposed to go this morning but we are hopefully they will fly this afternoon.

She added: “We have to assess it on a regular basis.”

Aberdeen airport was open though services suffered some disruption as the runway was regularly cleared by airport staff.

Spokesperson, Sarah Campbell said: “We are occasionally clearing the runway.  It takes about 45 minutes at a time.

“The snow is not by any means causing serious disruption.”

“Teams continue to work around the clock.”

A spokesperson for Angus Council said it had drafted in extra staff to help with snow clearing efforts.

But there was cause for some good cheer in Edinburgh when a spokesman for City of Edinburgh Council said that most people would not receive a parking ticket if they had to abandon their car because of the snow.

They said: “If the snow is so bad that someone’s car is stuck then it may be disguising the markings anyways.

“But if the snow was to disappear, which we are not expecting, and someone had left their car illegally they may get a ticket.

“But people are able to appeal a ticket in any situation.

“That is not to say that everyone would win their appeal because of the weather.

“If the markings are obscured then a parking attendant will not issue a ticket.”

A spokesman for NSL said: “We are running with a normal compliment of parking attendants.”

Elsewhere schools were closed in Edinburgh, Fife, the Lothians and Dundee.

A City of Edinburgh Council spokeswoman said: “No-one can remember a time that all of the schools in Edinburgh have been shut before.”

But for some private school children it was business as usual.

Cargifield Prep School in Edinburgh, which caters for pupils aged three to 13, opened its gates as normal.

John Elder, headmaster, said that staff should try their hardest to get into work: “Some of our pupils and staff board but we have 28 out of 30 staff in and 240 pupils out of about 315.

“I drove six hours to get here from Angus in a blizzard yesterday.

“We would expect staff to try their hardest to make it to work. To be fair when you’re being paid to work you should try your best to get there.

“Three of our kitchen staff have travelled from Fife, we’ve had staff travelling by car, bus, walking and digging their cars out.

Mr Elder said he couldn’t comment on other schools.

He added: “If they can’t get very important personnel in then they have a problem.

“Most schools are closed when the kids live within two miles of the school.

“But some are closed for health and safety.”

Fettes College on Carrington Road in Edinburgh was also open with around two thirds of pupils boarding at the school but others also making the journey.

Merchiston Castle School in Colinton Road in Edinburgh was open for boys who board at the school but all dayboys were sent home.

A spokeswoman said: “All dayboys were sent home from school this morning but we are hoping to be open again tomorrow.”

Regular updates were being left on George Watson’s College website in Edinburgh by principal Gareth Edwards.

He said: “Owing to the severe weather conditions, which are continuing to make travel to and from the School hazardous and will prevent the School from having adequate staffing levels, I regret that it will not be possible for the School to function today.

“Therefore the School will be closed today, Monday 29 November 2010.”

It was also uncertain whether primary sevens at the school would make it on their London trip.

But Mr Edwards later added: “The P7 party boarded the train at Edinburgh this morning but the train then broke down outside Newcastle.

“The group is now on another train traveling south but its arrival in London will be delayed. The party’s eventual arrival at Baden Powell House will be intimated in a further update later today.”

The snow also caused further disruption as the St Andrew’s Day celebrations in Edinburgh were cancelled for safety reasons.

A spokesperson for Edinburgh’s Christmas said: “Due to the adverse weather conditions, all of the St Andrew’s Day celebrations in St Andrew Square Garden, Edinburgh, have been cancelled.

“The snow has damaged two of the marquees, creating a potential public safety issue, and with the extreme weather set to continue, all events, including Tuesday evening’s Ceilidh Finale, have been cancelled.”

NHS Lothian was also urging patients, visitors and staff to take extra care when travelling in the snow.

One GP surgery, Kirkliston Medical Practice in West Lothian, was closed due to the weather and some others were offering a restricted service.

Professor Charles Swainson, medical director of NHS Lothian, said: “We know that travelling conditions have been difficult today, and we would urge people to use public transport where they can, and to only travel where necessary.

“We are working to clear the snow from the car parks and roads on our sites, and I would urge people to bear with us while we do this.”

Edinburgh Chamber of Commerce said that it was difficult to put a value on how much money would have been lost.

A spokesman said: “Today is a voluntary St Andrew’s Day public holiday so many people may have taken the day off, mostly in public services.

“It is very important to notice what a great job has been done by the local authorities and transport authorities to get people to their destinations in very difficult circumstances.

“The cost of people not making work is a matter of conjecture but when you have a massive number of people who can’t get to work the cost is always hundreds of millions of pounds.

“Resilience plans by employers should be put in place for this happening.”

A spokeswoman for the Met Office said that the wintry weather is set to ease off by the end of the week.

But she added: “The snow will continue across the north and the east on Tuesday and the south and west will remain dry with some sunshine but it will be cold everywhere.

“In the north and east the snow showers will continue for the rest of the week but perhaps not as heavy or as frequent.

She added: “The snow should start to disappear by Wednesday.”

However with temperatures plunging to as low as minus 20 in parts, police warned that could lead to icy conditions instead, and appealed for people to make only necessary journeys.