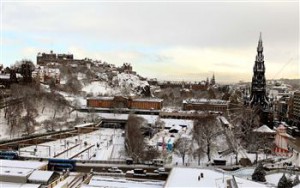 But they said the record low temperatures – set to last a fortnight – could see Scotland miss out the worst.

A fast thaw would cause havoc with water tables.

But with prolonged periods of cold expected, the thaw is predicted to be far more gradual.

A spokesman for the Met office said: “The weather is not set to change throughout the course of the coming days. It stays cold with the risk of snow.

“By the end of the week and into the weekend the risk of snow diminishes and it will stay cold throughout the weekend and in the new week.

“If we have a rapid thaw this increases the risk of flooding but it doesn’t look like this is going to happen.”

Emergency planners said that that they have procedures in place in the event of any floods.

A spokeswoman for the Scottish Environment Protection Agency (SEPA) said: “It is probably too early to tell (if there will be flooding).

“It really depends on how it thaws.

“We have contingency plans the whole year round and have people monitoring river levels.”

A spokeswoman for City of Edinburgh Council added: “We have people planning for the weather.

“We are keeping an eye on the weather and we get regular updates from the Met Office and have contingency plans in place.”

Yesterday there was 17cm of snow on the ground in Edinburgh with more snow set to fall.

Hundreds of schools throughout Scotland were closed yesterday for the second day due to the wintry weather including those in Edinburgh, Perth and Kinross, West Lothian, Moray, Dundee and the Borders.

And those with travel plans were still suffering from the treacherous conditions as roads were closed, planes delayed and trains cancelled.

Edinburgh airport opened at noon yesterday with a number of flights departing and landing but there was still a significant disturbance.

Despite forecasts for further snow, airport officials said they were hopeful it would remain open.

The A9 was open yesterday despite being badly affected on Monday but motorists were advised to drive with care.