WHILE the rest of the country has been gripped by freezing temperatures and chaotic roads, keen skiers and snowboarders have been revelling in the fact that the winter sports season is here.

The Midlothian Snowsports Centre near Edinburgh has been buzzing with families taking advantage of days off school and work.

Skiers flocked to the normally dry slopes, which are now completely covered in several feet of snow. 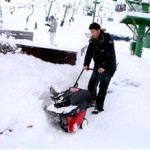 Stuart and Niki Watt, from Edinburgh, had ventured out with their sons Marcus, 12, and Sam, seven, to enjoy a family day out at the centre.

Mrs Watt, 40, said: “With the boys being off school this week we thought we should think of ways to keep them active and entertained.

“Sam actually took lessons here last winter so he’s been enjoying getting back out.

“Last year we went up north and have been on a couple of ski holidays so we were really keen to get out here while the snow is lying and we all have a bit of spare time.

“Usually when there’s snow here you can still see the mat, I’ve never seen it quite like this, with perfect coverage.” 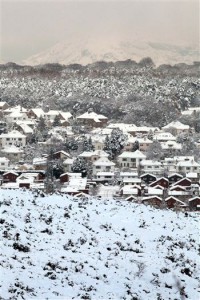 Today (Thur) the slopes were busy with people who were making their first descents this season.

David Gray McMath, duty manager of the centre, said: “We are normally quite busy during the week with groups of school kids here on organised lessons, but with most of them being closed they’ve been forced to cancel.

“But now we see this influx of people coming to practice on the slopes before they head off on skiing and snowboarding winter breaks.

“This is the busiest I’ve seen the place on a weekday all year with people just popping in.

“To be honest, I know everyone is moaning about the wintery conditions, but I hope the snow is here to stay because it’s been great for business.

“Now what we have to do is make sure we keep the place maintained and all of the paths clear so it is a safe and enjoyable experience for everyone.”

With the “perfect” skiing and snowboarding conditions ready-made just outside the city, many of the day’s visitors agreed that the slopes were comparable to those in the Scottish Highlands.

David Hughes, 26, an engineer from Edinburgh, said he was enjoying a day off work after digging out his skis.

He said: “I work outside the city so there was no way I was going to make it in there today.

“I reckon if this sort of thing is on your doorstep you just have to take advantage of it.”

And his dad Alan, 57, said: “I’ve been skiing for more than 30 years and I’ve never seen this place quite like it.

“Over the years I’ve skied up north at some of the country’s best resorts and this is honestly just as good as any of them.”

This weekend many of the slopes in the north of Scotland are set to open for the season – the earliest for 13 years.