INSURERS have refused to pay out for a pensioner’s snow-wrecked house – because it does not count as storm damage.

Sheila Corrigan, 72, from Edinburgh, said she was lucky to be alive after her car port roof caved in, ripping down an attic wall inside her 1960s home. 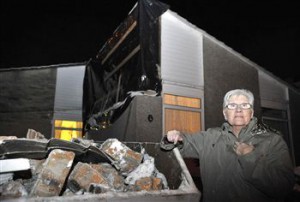 But Mrs Corrigan got another shock when her insurers refused to pay up for the repairs, which are set to cost tens of thousands of pounds.

The firm claimed conditions at the time the snow fell were not severe enough to count as storm damage.

The Association of British Insurers (ABI) today (Wed) advised homeowners to check their insurance policies if in any doubt.

Mrs Corrigan said her home, in the Gilmerton area of the city, looked like it had been hit by a bomb.

She said: “The bricks were coming down in big lumps and the noise from it was tremendous.

“I was in at the time it collapsed but fortunately at the other side of the property.

“About an hour earlier I had been brushing cobwebs from underneath the carport and would have been killed if it had fallen on me.”

The pensioner faces Christmas misery after being told she would be getting no money from the insurance company – despite them never having visited to check the damage.

Mrs Corrigan said she switched her home insurance to a firm called RIAS because “they claimed to look after older people”.

She said: “I remember seeing a brochure which said ‘relax and let us take care of you’.

“They told me I wasn’t covered without even coming out to inspect what happened.

“They just said ‘we don’t cover snow storms’ but what constitutes a storm?

“I think they are shocking, they have never even been to see my house.

“It’s appalling and I’ve been in contact with my local councillor and my MP Ian Murray because I want parliament to have a look at insurance speak and what is understood by the words they use.

“They should explain to you exactly what you’re covered for.

“What on earth do they think people are insuring themselves for if it’s not something like this?”

She added: “RIAS advertise themselves for the over 50s, they say they care for the elderly but I don’t think they have fulfilled their contract of care.

“I had taken out emergency cover – so I at least thought my house would have been made safe.

“I’m lucky because my neighbours and my son came straight over to dig a path – otherwise I wouldn’t have been able to get out.

“And my son has sealed up the gaping wall with black plastic bags.”

Mrs Corrigan said she has had to have her heating on 24 hours a day since it happened at the start of December.

She said: “The temperatures have been well below freezing for some time and if the heating wasn’t on the house would be very, very cold.

“The fact is that I cannot do any repairs just now anyway because bricklayers can’t do anything if the temperature is below three degrees.”

The damage to Mrs Corrigan’s Ford Fiesta and her son’s Lexus will be covered by vehicle insurance.

Mrs Corrigan took out her policy with RIAS, which is owned by a firm called Ageas.

A spokesman for RIAS said: “I can confirm that we received a claim from Mrs Corrigan regarding damage caused by ‘weight of snow’. 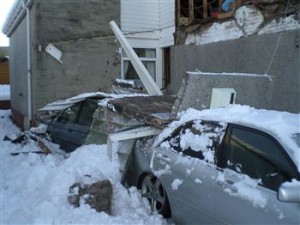 “Mrs Corrigan’s insurer, Ageas, has declined the claim because ‘weight of snow’ is not an insured incident under the ‘storm damage’ peril on our standard Home Insurance policy, and on the date of the incident the maximum wind speed was 31mph, with a snow depth of 7cm, which can’t be classed as storm damage.

“Weight of snow claims can be considered under the optional Accidental Damage section of the RIAS Home Insurance policy, which unfortunately Mrs Corrigan hadn’t taken out when the policy was purchased.”

A spokesman for the ABI said: “Household policies generally cover storm damage. They may consider damage caused by snow settling on a roof for days or weeks is not the result of a storm. It is worth contacting your insurer if in doubt.”

How to improve ventilation in your home