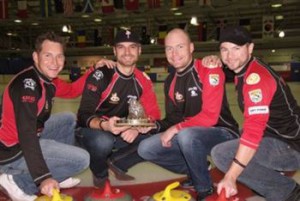 In a devastating turn of events the final stone of the Perth Masters curling final (Sun) was thrown off course and the hopes of a home win for Perth’s Duncan Fernie thwarted.

Fernie’s performance in the final was flawless, he called a great game, better than Mike McEwen‘s Canadian side,and executed his shots with precision every time.

McEwen could only follow in the wake of the quietly confident Fernie.

The Perthshire skipper got off to a strong start by securing a score of three in the second end.

He made a brave, attacking shot with his first stone and leaving three lying in the house.  McEwen was left with a difficult shot to play and ultimately only managed to clear one of Fernie’s from the house and handed the Scot the opportunity to grab three.

In the following end it looked as though the Canadians were to bounce back and level the score in one fell swoop but again McEwen missed a double take out and was only able to put one on the scoreboard.

The frustration started to show in the Canadian side as McEwen fired his broom along the ice to the far end of the sheet into the path of Fernie who calmly stepped over it and paid little notice to the Canadians bad temper.

Fernie had established a strong position in the final and was dictating play, careful not to let the Canadians back into the game he pushed McEwen to play more defensively.

The Scottish skip led 4-1 after the fourth end and all was going to plan for the home side despite having a few shots thrown off course by some grit similar ‘pick-ups’ on the ice.

By the end of the fifth, it was 4-2 and the Canadians were in trouble, they needed to take a gamble and get points on the board if they were to maintain a chance of claiming the silverware.

Throughout the sixth end, the skill of Fernie’s team was clear for all to see as David Edwards, playing third, picked out the Canadian’s stone lying shot.  Although McEwen responded strongly and rolled a stone towards the button, Duncan Fernie silenced the Canadian skip with a double take out.

For his final shot Duncan needed a hit on the nose to win the end which, true to form, he did giving his side a significant three shot lead with two ends to go. 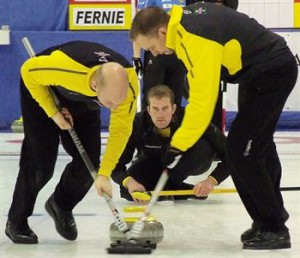 In the seventh McEwen’s chances of victory were all but over as his final stone was sent off course by a pick-up and didn’t make it into the house.

The Canadian’s frustration was for all to see as brooms were angrily thumped against the ice.

Fate seemed to swing in favour of the visitors in the eighth end as David Edwards’ first stone was derailed and knocked one of the Canadian stones into the house to leave the visitors lying with three.

For Fernie’s final stone he was left with a hit on the nose or hit and roll to claim victory but the stone was sent out of alignment by yet another pick-up and the Canadians were crowned the winners with a score of 6-5.

After the presentation, Mike McEwen said: “To Duncan and his team, you played really, really well and I wish you all the best for the future.

“If you continue to play the way you did today I am sure you will do very well.

“You made some big shots today and you deserved to win.”

Duncan Fernie and his teammates, David Edwards, Richard Woods and Colin Campbell were lost for words after the match.

Duncan said: “We were in control for the whole game, the turning point was the last stone.”

David said: “Duncan played a great game with a lot of key shots.

“Against a team of that quality you are going to have to play good shots and we came up with the goods every time they asked the questions.

“To lose it in that way is obviously very disappointing.”