SELFISH drivers will have their cars towed if they park on busy routes during heavy snowfall, under plans being drawn up by a Scottish council.

During the recent arctic conditions, many drivers who could not park in side streets left their cars on ma 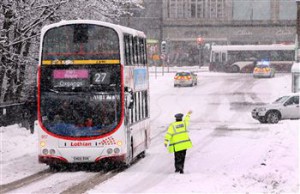 Drivers who ignore the ban will face fines or having their vehicles towed, if the plan is implemented.

Inconsiderate parking caused particular problems for buses, which were the only transport option for many Scots during the whiteout.

City transport chief Gordon Mackenzie confirmed they were looking at the move, which is already used in Canada to keep traffic moving during bad weather.

It is understand that Edinburgh is the first council in the UK to look at using “snow routes”.

Neil Greig, spokesman for the Institute of Advanced Motorists, said: “If there is a formal, well-advertised campaign on snow routes then that is fine because people will have time to act.”

The plan will be examined by a “winter review team” on the council. The group will also examine the introduction of emergency one-way orders.