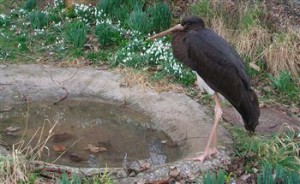 A RARE black stork found with a broken wing off the coast of Jersey has been given a home at Edinburgh Zoo.

The young bird was thought to have been migrating when he was injured in strong winds.

He was rescued by a vet in Jersey and when kind-hearted workers at Edinburgh Zoo heard of the bird’s misfortune they decided to put him up.

Bird keepers have now called him Max after his Jersey rescuer.

Black storks are normally found in Scandinavia, Eastern Europe and Russia and migrate to Africa at the end of each European summer.

Colin Oulton, bird team leader at Edinburgh Zoo, said: “Our stork has become a bit of a celebrity in Jersey since he was first found injured and rescued back in August last year.

“He was actually the first black stork seen in Jersey since the mid 1990s. It’s believed stormy weather at the time was almost certainly responsible for him drifting off course and then being injured.

“The stork was taken to a local Jersey vet who helped to treat and heal the bird, and then he was temporarily housed at Durrell Wildlife Park in Jersey, before coming to Edinburgh Zoo last month.

“Although the original plan was for the bird to stay in Jersey for only a couple of months until he was strong enough to finish its migration, the severity of his injury made his re-release into the wild unsuitable.

“He still has the ability to glide, but is unable to fly at any great height and is probably not strong enough to survive the rigours of migration.

“When we heard of his plight we offered to give him a home at Edinburgh Zoo.  So far our new inhabitant is settling in well, regularly enjoying snacks of mice and insects and wading round in a pond in his enclosure.” 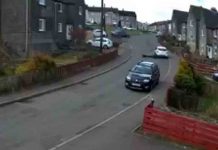