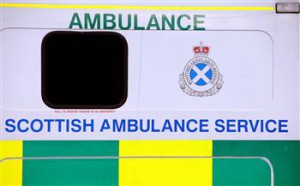 A DOZEN ambulances were sent to an accident – which resulted in a 12-year-old having a plaster put on his finger.

The Scottish Ambulance Service responded to calls that a lorry had collided with a bus carrying 40 school children in Cupar, Fife.

But – on arrival – the first emergency team called off the 11 other vehicles as it transpired that no crash had taken place.

Fife Police confirmed that debris from the road had smashed a window on the bus.

The 12-year-old boy suffered a cut to his finger but the bus driver was on hand with a plaster.

The accident happened at around 8.15am today (Wed) at the junction between the A91 and B937 near Collessie.

A spokesman for the Scottish Ambulance Service said: “We were initially called out to a road traffic accident involving a lorry and a bus containing 40 children.

“We received three or four phone calls from bystanders, two of which described a lorry colliding with a bus so we reacted based off of those calls.

“We had a lot of conflicting reports.

”We initially mobilised 12 ambulances and a special operations team but on arrival the teams were stood down and in the end only one ambulance attended.”