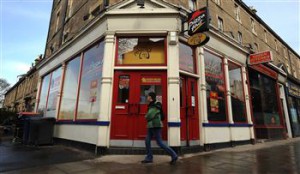 A PIZZA Hut employee was stabbed less than 100 metres from his workplace in one of Edinburgh’s wealthiest areas.

The 25-year-old was attacked on Raeburn Place in Stockbridge at around 8.40pm on Sunday.

His attacker ran off down Dean Park Street and the victim was rushed to the Royal Infirmary of Edinburgh for treatment.

He was kept in hospital overnight but his injuries were not thought to be life-threatening.

Police are treating the incident as attempted murder and say the incident happened at a time when the main road would have been busy with people coming and going from restaurants and pubs, and appealed for anyone with information to get in touch.

The suspect is described as being white, around 27-years-old, and was between 5ft 7in and 5ft 9in with a medium build.

He has short brown hair and bushy eyebrows and is thought to have had a prominent scar along his right jaw line.

At the time of the incident he was wearing a dark coloured hooded top and dark trousers or jeans.

No one was available from Lothian and Borders Police to confirm whether or not the assailant had been a customer at the takeaway restaurant.

A spokesperson for Pizza Hut said: “The wellbeing of our staff is extremely important to us and we were shocked to hear about this incident.

“Fortunately our employee’s injuries are not life-threatening, and we will give him our full support during his recovery as well as supporting police with their investigation.”