A FAMILY necklace, passed through a Scots family for generations was once owned by Mary, Queen of Scots, it has been revealed.

The necklace which has been kept in a cigar box for hundreds of years- was loaned to a small museum in Linlithgow, where it will go on display to the public.
Its owner, who wishes to remain anonymous, lives locally in the area and said that the necklace has been passed down through the family for generations.

Curator of Annet House Museum and Garden, Alan Young, said “It’s claimed the necklace was presented by Mary, Queen of Scots to one of her ladies in waiting, a girl called Mary Kelso.”
“It is said to have been in his family for 500 years- apparently it was kept in a cigar box and stuck in a drawer.”
“I’ve no reason to doubt the story behind these pearls is genuine and that an ancestor of the family has been a lady in waiting. All of the evidence suggests, Mary, Queen of Scots was very generous towards her ladies in waiting.”
The delicate choker, which is in excellent condition thanks to its imaginative protective casing, consists of strands of small seed pearls linked by gold squares.
Fresh water pearls are attached to the strands of seed pearls, and it has a broad ribbon at either end, used for tying the necklace.
A jeweller who has examined the necklace in detail confirmed the style is consistent with the mid-16th century.
Efforts to establish the exact history behind the precious necklace are now under way.
It will be on display from this Saturday at Annet House’s Images of a Queen exhibition, in Linlithgow.
Mr Young said he was “surprised” and “excited” when the family came forward with the historic necklace. 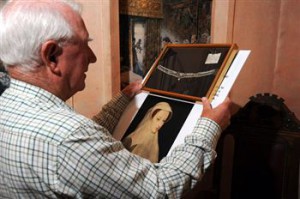 “Things from the 16th century are normally either in the posse ssion of a family or they are in a large museum- they don’t usually find their way to small museums.”
“I have no idea how much these pearls are worth. The only way you could value them would be to put them up for auction.”
Sandy Thomson of West Lothian History and Amenity Society said: “It’s nice that the pearls have been presented to the museum to go on display for a while rather than the owners just putting them up for auction to try and get as much money as they can.”
“A lot of people would just have said: ‘I can flog these pearls and make a lot of money,’ but the people who own them seem to be a bit more generous and responsible.”
The exhibition will run until October 31.
Curator of Annet House Museum and Garden, Alan Young, said: “It’s claimed the necklace was presented by Mary, Queen of Scots to one of her ladies in waiting, a girl called Mary Kelso.”
Share
Facebook
Twitter
Pinterest
WhatsApp
Linkedin
Previous articleDavid Tennant slapped with fish on radio show
Next articleBuzz words: honey bee lingo study could keep the hives alive