A VIDEO showing a Scots post office boss wrestling a shoplifter to the ground has become an internet sensation.

The Youtube clip shows shopkeeper, and former Tae Kwon Do champion, Urfan Hussain, throwing the youth to the ground after he tries to leave the shop with two bottles of milkshake worth £2.50.

The video, which has racked up almost 2,000 hits, also shows Mr Hussain’s 51-year-old dad Riaz, joining in, tussling with the shoplifter on the floor of the Costless Express store, which houses Muirhouse Post Office. 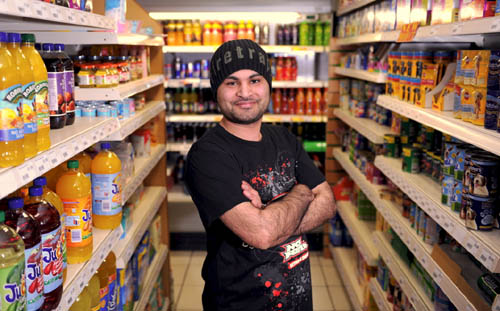 Urfan Hussain is a former Tae Kwon Do champion.

The 30-year-old, from Edinburgh, who posted the CCTV footage of himself tackling the teenage thief on Youtube, said he hoped the video would act as a deterrent to shoplifters visiting the store, which his family have run for 21 years.

The video, which has been compared to the notorious “Big Man” incident, shows Mr Hussain grabbing the young shoplifter and wrestling him to the floor as he tries to leave the shop. 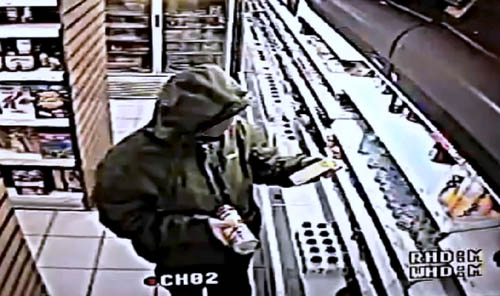 The CCTV footage shows the shoplifter attempting to nick two milkshakes worth £2.50. 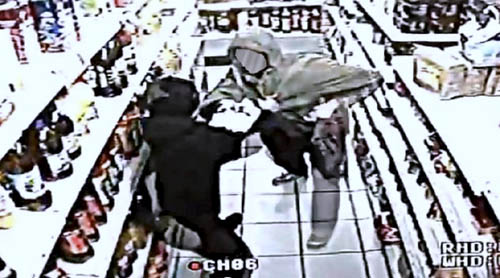 The young thief is then grabbed by Urfan who restrains him. 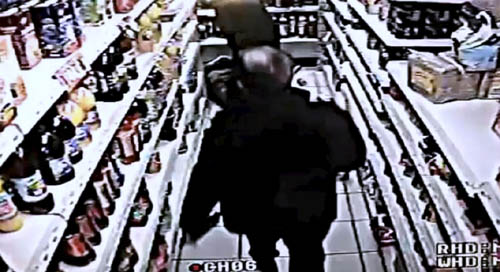 Mr Hussain’s father Riaz then gets involved, helping to wrestle him to the floor. 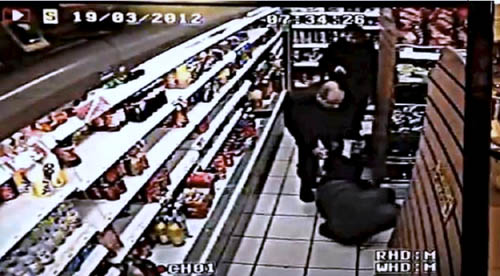 Mr Hussain said his actions were purely in “self-defence”.

The clip has divided opinion, with some viewers questioning whether he used reasonable force  to deal with the assailant.

Mr Hussain said the thief had been spotted allegedly shoplifting from his store “two of three times” before being barred.

He said: “He came back and stole two more shakes. I approached him as he went for the door and took a swing at me. I’m a second degree black-belt in Tae Kwon Do so I know how to control that kind of situation and do it without hurting someone. I grabbed him and threw him down.

“He was shouting and swearing and then he started going for his pockets. I didn’t know if he was going to pull a needle or a knife and, after what happened last year, I didn’t want to take the chance.”

In January last year Mr Hussain was held up at gun-point by 18-year-old Craig Vallance and threatened with being shot.

The assailant was later jailed for five years after wielding what turned out to be a replica rifle.

Mr Hussain said he deals with around three shoplifters per week, most of whom surrender without incident.

He explained: “It was my friend who suggested I put the CCTV on Youtube, but I had no idea it would get so many hits.

“The police said I should’ve left him to leave the store first but Scots law is on my side as he went past the counter and touched the door.”

Some other local shopkeepers  have accused Mr Hussain of using excesses force similar to that seen in the infamous Youtube Video “big man” where a train passenger ejected an alleged fare dodger.

One shopkeeper, who asked not to be named, said: “This was clearly unreasonable force. It was totally disgusting and unacceptable. The shopkeeper should be charged with assault.”

Mr Hussain defended himself against criticism that he acted with “unreasonable force”.

He said: “I was completely restrained in the circumstances and acted purely  in self defence. I feel that everybody should have the right to defend themselves in these situations and I would like to ask other shopkeepers what they would have done?

“I wasn’t being aggressive at all, and it always depends on the circumstances how you choose to act.”

A police spokeswoman said: “A 17-year-old boy has been charged in connection with this incident, and is due to appear at court at a later date.”

The video has drawn comparisons to the infamous YouTube video where a fare-dodger was hauled off a ScotRail train by a burly vigilante.