The important contribution and role of Fishery Boards and Fishery Trusts in the management of Scotland’s freshwater fisheries has been highlighted by the Association of Salmon Fishery Boards (ASFB) and the Rivers and Fisheries Trusts of Scotland (RAFTS) in a new factsheet published today.

“Not only do Boards manage virtually all of Scotland’s salmon and sea trout fisheries, they do so at no cost to the public purse – Boards are principally financed by fishery owners to the tune of £4.38m. 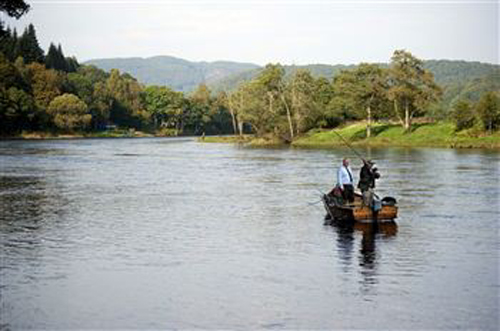 Scotland’s salmon rivers are mainly financed by the beat owners

“Boards have powers to appoint water bailiffs to enforce salmon fisheries legislation in Scotland. Over 300 water bailiffs who are in the frontline in enforcing Scotland’s salmon fisheries legislation have successfully undergone formal accreditation and they play a vital role, in partnership with Police wildlife crime officers, in tackling the illegal killing of wild salmon and sea trout.”

Dr Wells added: “A major conservation initiative has been the promotion of catch and release over the last 10 years. This system, operating at a catchment level, has ensured that the number of fish killed within rivers has been dramatically reduced, mainly on a voluntary basis. 67 % of salmon and 66 % of sea trout caught by anglers are now returned to the water.

“There is little doubt that catch and release has been a significant factor in stabilising salmon and sea trout populations in much of Scotland.”

Callum Sinclair, Director of RAFTS, commented: “The network of Fishery Trusts has expanded hugely in recent years and our near national network of 25 members now generates £2.35m from private and grant sources in addition to the £1M+ raised annually by RAFTS for the work of Trusts.

“In tandem, the workload of Trusts has grown exponentially and is reflected in an impressive record of achievements. For example in the last decade over 1000 km of riparian habitat has been restored or improved and access for migratory fish to over 2000 km of river has been made possible through the removal or easement of man-made barriers.”

Mr Sinclair added: “National collections of work, developed by RAFTS, are now being delivered by Fishery Trusts – for example the Fishery Management Planning and the Biosecurity and Invasive Non-Native Species (INNS) Programmes. The INNS programme, tackling invasive non-native species such as American signal crayfish, mink and a range of alien riparian plants has itself has secured more than £5M of funding for practical work in the past three years.

“Trusts also complete a range of other activities which support wider fisheries and environmental management objectives including the delivery of local education programmes which have engaged tens of thousands of children across Scotland and made an important contribution to our societal understanding of the environment, freshwaters and fish.”