Staff at Arthritis Research Campaign (ARC) at Bonnyrigg were rifling through a box of donated items last week when they made the discovery.

After years of sifting through tattered books, dusty ornaments and well-worn clothes, one volunteer said she immediately recognised the human remains. 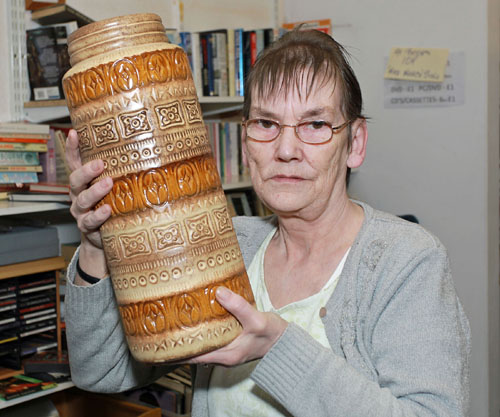 Lena Skilbeck, (60), has worked at the ARC shop for 17 years. She made the discovery last week.

She said: “It was last Tuesday when it happened, someone left the vase on a counter in the shop and one of the girls knocked it over.

“I immediately recognised what it was as I recently scattered my dear friend’s ashes.

“I told the other girls in the shop but they didn’t believe me – they thought I was joking.”

“I was fine and swept up the ashes that had spilled, but a couple of the girls were very upset, they didn’t want to go into the staff room as it gave them a funny feeling, they said it just didn’t seem right.

“It is certainly the most unusual donation we have ever had, at first I planned to scatter the ashes myself but the funeral home said they would keep it.

“I think someone must have handed it in by mistake, so we are just hoping that someone will come forward and claim the ashes.”

After making the discovery, shop volunteers unsure of what to do handed the remains to a local funeral directors, who confirmed the ashes are from the remains of a person.

Discovering who the ashes belong to will be impossible unless someone comes forward as the heat produced in the cremation process destroys any traces of DNA.

Vice-chairwoman of the store, Helen Hope, 85, said it was the most unusual donation the shop had ever received.

She said: “This is definitely the most unusual thing we have ever had handed in to us. I would hope the ashes will be returned to the family somehow.

“Who knows how this has happened, maybe a family has just lifted the vase while clearing out a house and not realised the ashes were inside.

“We kept them for about a week so the person who handed them in had time to realise what had happened.

“It’s illegal to do anything with them, so I went over to a nearby undertaker and she came over and said they were human ashes.”

The ashes are now in the care of Barclays Funeral Services.

Funeral service arranger Arlene Newbigging said there were guidelines on dispersing ashes. She said: “We’re holding on to them for now in the hope that the person who handed them in might realise there were ashes inside.”