MEMBERS of a Belgian karate club have spoken of their relief after they were rescued from a freezing Cairngorms mountainside.

Three men and six teens from the Go-no-Sen karate club from Hasselt, Belgium were rescued by a Sea King helicopter from HMS Gannet on Tuesday.

The teens, four boys and two girls aged between 14 and 16, were stuck in four feet of snow on the side of Ben Macdui. 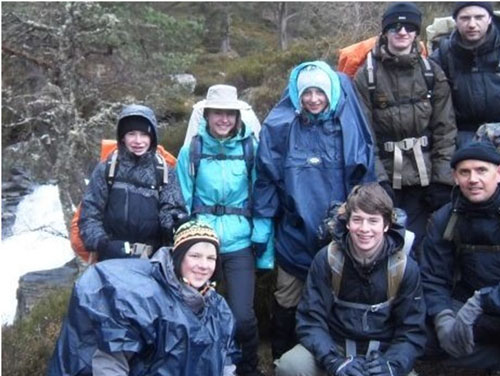 Nine teens were rescued from a freezing Cairngorms mountainside.

Team leader Eric Bortels, who runs the club, described how he contacted a friend moments before his phone battery died to give rescuers his location.

The group were on the third day of the hiking trip when they were caught in fierce snowstorms.

Experienced hiker Eric Bortels (corr), who also works for the karate club, said: “We do like adventures. We left the village of Braemar on Monday with three adults and six teenagers, on foot to explore the Highlands.” 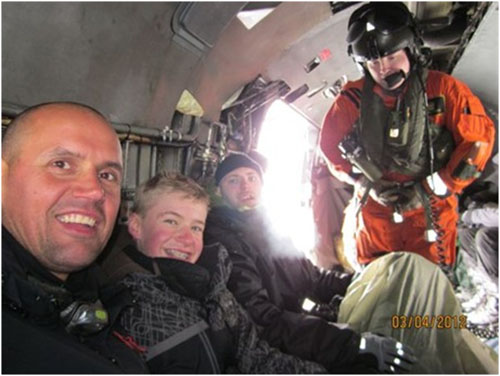 The group was taken to safety in a Royal Navy helicopter.

Mr Bortels continued: “We intended to make our camp down at the foot of the mountain.

“Atop Ben Macdui the weather closed in. Within moments buckets of snow fell from the sky.

“After that, walking was impossible.”

The nine karate club members decided to spend the night on the mountain.

Mr Bortels continued: “We still had our cooking pot and we crawled into our thermal sleeping bags.

“But it was still snowing, and it grew ever higher around our tents.”

The group were shocked to discover in the morning they were almost completely snowed into their tents.

They decided calling for help was the only option.

Mr Bortels managed to send a text message to a friend who lives in the north of Scotland – just moments before the batteries on his phone died.

He had earlier struggled to find a strong enough reception to make a call.

The information allowed a mountain rescue team to pinpoint their location, and the group was taken to safety in a Royal Navy helicopter. 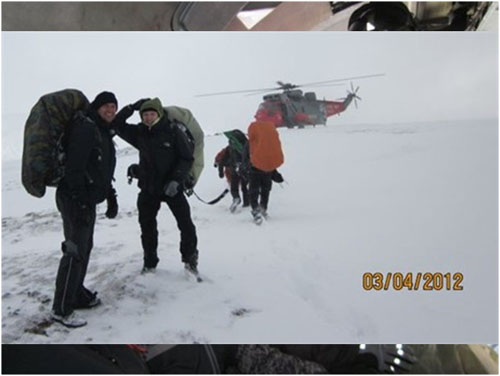 One teen managed to text a friend who lives in Scotland before his phone battery died.

“We packed everything quickly to be ready to fly. Only after takeoff, could I finally laugh again.”

The Sea King was crewed by winchman Petty Officer Mike Henson, a celebrated airman who saved 13 sailors from a stricken ship off the coast of Oman last December.

And on Tuesday he rescued five people from a ship off the coast of Wales after the Sea King was diverted from the Cairngorms operation.

As the teenagers prepared to fly back to Belgium today (Friday) Mr Bortels added: “They’re fantastic. I think we did the right thing. The kids still like me and they really want to go back.

“They loved the trip in the helicopter.

“I want to thank the helicopter crew and the mountain rescue team as well. They kept us warm and gave us coffee.”

He said: “The location they sent was bang on. We told them they were safe where they were and not to move.

“They did the right thing. And they are all none the worse – no frostnip or anything like that.”

He added:  “We didn’t believe the helicopter was going to be able to get in because of the conditions.

“And for us to walk in to them with that amount of fresh snow would take a lot of hours, and during that time the kids would have got colder and susceptible to hypothermia.”

But a spokesman for Mountain Aid said the group should never have got themselves into the situation in the first place.

“I wouldn’t have advised anyone to go out that day. At the end of the day people make their own decisions without realising that they may put other people’s lives at risk. The cost for that rescue would have been in the thousands, paid for by you and me. But people don’t think about that when they decide to press on despite the bad weather.

“Tourists can underestimate the dangers of the Scottish hills but what they don’t realise is that the weather can change very quickly. The adults in charge could have made the decision to turn back earlier in the day and they didn’t. They chose to continue and in doing so, they ended up in a mess.

“Those in charge had a degree of responsiblity and failed to make the right decision.

“They should’ve turned back sooner and found something else to do. The mountains will always be there and if the conditions are not right, then change your plans. It’s that simple.

“The figures will always be difficult to quantify but the cost involved in that rescue will have been in the thousands.”