A TALENTED Scots jockey has died in a swimming accident while on holiday in Greece – the day before his 22nd birthday.

Campbell Gillies died in the pool early today within hours of arriving at the Corfu resort of Kavos.

The Cheltenham winner from Haddington, East Lothian, had happily posed for a picture with friends enjoying pre-flight beers at Gatwick airport yesterday. 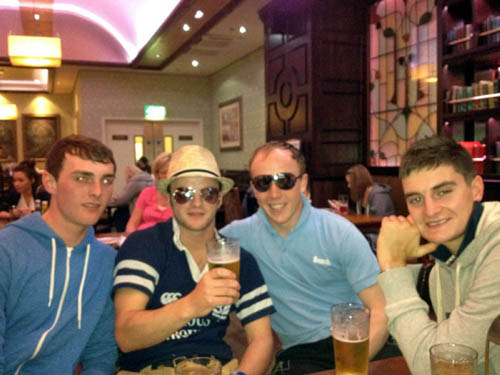 In March he celebrated the biggest win of his career, racing Brindisi Breeze, owned by Lucinda Russell, to victory at Cheltenham.

His agent Paul Brierly today paid tribute to the jockey, who he said was like a “little son” and “one of the brightest talents in racing”.

Mr Brierly confirmed: “I think it was a swimming accident but it’s still a bit vague about exactly what happened.”

He added: “It’s just heartbreaking, I’m not only his agent but I’ve known him since he first stepped on one of Lucinda’s horses.

“We’re very good friends, he was like a little son to me.

“It’s all quite unreal at the moment.”

Campbell and his friends had joked about jumping into swimming pools on Twitter hours before the 21-year-old died. 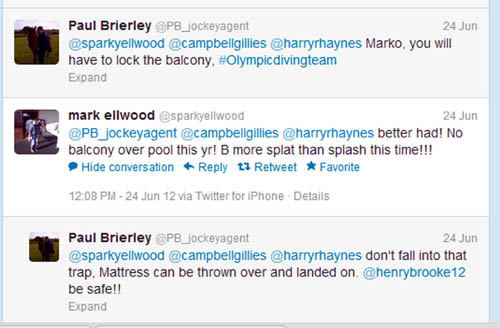 The friends joked before going on holiday about jumping into the swimming pools.

Mr Brierly Tweeted on Sunday, the day before the flight: “Marko you will have to lock the balcony #Olympicdivingteam”

Mark Elwood, who works as a “head lad”, replied to him saying: “Better had! No balcony over pool this year! B more splat than splash this time!!!”

Mr Brierly insisted today that Campbell had not been involved in jumping from balconies and that had nothing to do with the accident.

He added that Campbell and the other jockeys he was holidaying with, Henry Brooke, Nathan Moscrop and Harry Haynes, had booked their holiday at the last minute.

“They will get very little breaks – you’ve got to grab one of these breaks whenever you can,” he said.

At Campbell’s home in Haddington, where he lived with his mother, brother and sister, the family declined to comment.

A woman believed to be his mother, Lesley, answered the door and referred all enquiries to Mr Brierly.

At the nearby Gardeners Arms, barman Stephen Fruzynski described Campbell as “a good lad who had his head screwed on”.

He said: “I knew him at school. He was a quiet lad who kept himself to himself. He never came out much.

“He was really well known in the local community.”

At the town’s Mercat Hotel a barman said: “He was doing really well, the whole town was backing his horses.

“The whole pub went mad when he won at Cheltenham. You should have heard us.

“No one can believe what has happened. Everyone is really gutted.

A family friend, Barry Brock, 32 said: “The whole town will be in mourning.

“My phone has not stopped all morning. It just shows you how much people here are thinking about him.

“He was a great guy with a great personality. I’ve never heard a bad word said about him.” 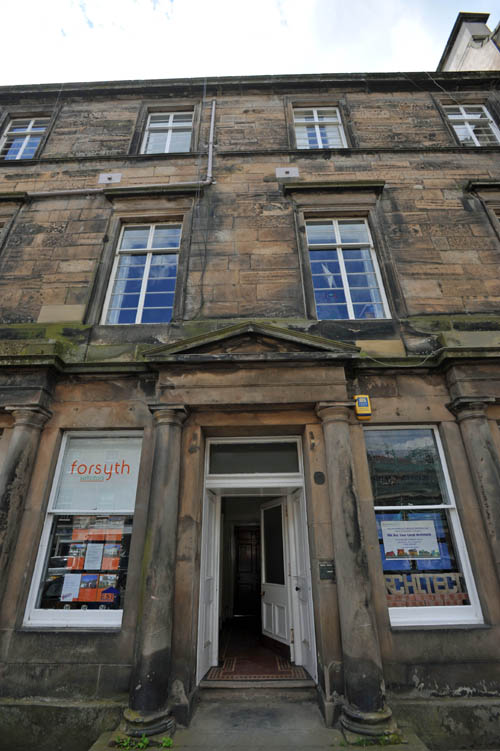 The flat in Haddington High Street that Gillies called home

The friends had been in great spirits as they headed off on holiday.

Campbell himself tweeted on Monday: “In the car.. next stop KAVOS.”

And his friends joked that he almost sent them to the wrong London airport.

A picture posted by friend Mark Ellwood just hours before Campbell died showed him enjoying a pint at Gatwick with friends as the group prepared to set off.

Today tributes poured in from friends and family, including from his brother Finlay’s rugby team, Glasgow Warriors.

A statement from the club said: ‘Glasgow Warriors are deeply saddened to learn of the sad passing of Campbell Gillies, brother of Warriors hooker Finlay.

‘A promising young jockey, Campbell shot to prominence when he rode Brindisi Breeze to victory in the Albert Bartlett Novices’ Hurdle on Gold Cup day at this year’s Cheltenham Festival.

‘The thoughts of everyone at Glasgow Warriors are with Finlay and his family at this terrible time.’

Kinross-based Lucinda Russell said: “We learnt this morning that Campbell died as the result of a swimming accident while in Kavos, Greece.

“Campbell was on a short holiday with one of our head lads, Mark Ellwood, and jockeys Nathan Moscrop, Henry Brooke, and Harry Haynes.

“This dreadful news has hit the whole yard. He was a much loved, popular and respected member of Arlary (House Stables), and it is so hard to lose part of our ‘family’.

“Our hearts go out to his mother Lesley, brother and sister Finlay and Rita.

“We are immensely proud of the achievements of Campbell. It was through his innate ability and talent that he reached great heights as a jockey at such an early age.

“More than that he had a wonderful charm that I believe came across to everyone who met him, and through his media interviews.

“His victory at Cheltenham on Brindisi Breeze was the pinnacle of his career; the race epitomised him as a jockey; his belief and confidence and his innate timing.

“He became one with the horse. This empathy and love of his horses was one of the reasons that he was a truly great jockey.”

Cheltenham Racecourse Tweeted: “Desperate news that jockey Campbell Gillies has died on holiday. Our thoughts are with his family & friends.”

In a tragic twist, Brindisi Breeze died last month after being hit by a fuel tanker, having bolted from Russell’s yard.

Race commentator Matt Chapman Tweeted: “Impossible to believe that three months after Brindisi Breeze and @campbellgillies charged up the Cheltenham hill both are gone.#madness”

Gillies had over 50 winners for Russell and had won 131 races in Britain.

His most recent ride was on Sunday at Hexham and he had been enjoying his most successful campaign with 38 winners in 2011-12.

A Foreign Office spokeswoman said: “We can confirm the death of a British national in Corfu on 26 June. We are providing consular assistance to the family at this difficult time.”

Average two-bed with quirky feature in basement reduced by a massive £350,000