TRENDY hardwood floors have been banned from thousands of flats in two of Scotland’s biggest cities.

Growing complaints over noise from neighbours mean landlords in Edinburgh and Dundee have been ordered to fit carpets.

The move has infuriated property owners, who face a bill of up to £4,000 per flat to rip up hard flooring and replace it with carpet. 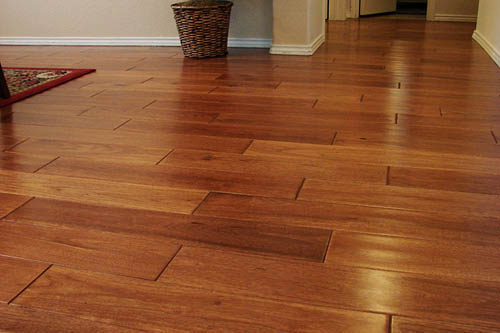 Community groups say the order will improve the lives of thousands of Scots living in flats whose lives are ruined by noise coming from properties above.

The change affects thousands of flats in the cities where more than two unrelated people live, known as House of Multiple Occupancy (HMO).

All such flats on the first floor and above with a residential property below will have to fit carpets in all living rooms and bedrooms as well as cushioned vinyl in kitchens and bathrooms.

Research by a UK property website revealed that around 40 people a week in Scotland decide to move home because of problems with their neighbours in 2011, many of them related to noise.

The rise in the number of complaints also ties in with the rising popularity of lifting carpets and sanding floorboards, made popular in the late nineties with TV interior design shows such as Changing Rooms.

Anne Wigglesworth of Tollcross Community Council, Edinburgh said: “We feel very strongly about this and we think it is good that the council has brought in this ruling.

“It is very difficult to live underneath a property with a hardwood floor and everyone who lives in a tenement can understand how noisy it gets.

“For me, considering your neighbours should always be an important priority, no matter who you are.”

Graeme Cruickshank, 67, from Edinburgh, said his life had been made a misery for the past 14 years as a result of hardwood floors.

He is the only owner in his tenement stair in the student-dominated Marchmont district of the city and says he is woken up every night.

“What I’ve found is a lot of landlords have taken up carpets and sanded floors, not because it looks attractive but because it’s easier to maintain.

“However these flats weren’t designed to have bare boards. It means that sound penetration is much greater than the architects envisaged.

“I reckon I’ve had fifty different people in the room above my bedroom.”

Mr Cruickshank is delighted by the order to fit carpets.

“Someone who controls your sleep has a way of controlling your life. Footsteps at 3am can be devastating,” he said.

But Rob Trotter of DJ Alexander letting agents in Edinburgh said: “Many landlords will be faced with bills of up to £4000 to fully carpet a large period built flat.

“Carpets may then need replacing every few years given the levels of wear and tear often seen at properties with groups of younger tenants.”

He added: “I cannot see how the laying of a carpet, or any other type of cushioned flooring, at a newly built flat with solid concrete floors, will make any difference to sound travelling between the floors.

“Whilst there are undoubtedly situations of anti social behaviour which are worsened by the lack of floor coverings, I believe any enforcement to lay new flooring must only be done on a case by case basis and only after due consideration of all the surrounding circumstances.”

Neither  Edinburgh nor Dundee councils were prepared to release details of noise complaints related to hardwood flooring.

Councillor Gavin Barrie, convenor of Edinburgh council’s regulatory committee, said: “Landlords are told of the need to re-evaluate their flooring as their licence comes up for renewal, so they are effectively given a year’s warning.

“If you look at the nature of property in Edinburgh, most of them are older tenement properties which carry noise easily.”

He added: “The HMO property market is essential to us but not at any cost.

“We would ask people to think about their neighbours and their right to a live in peace.

The move was prompted after  the Scottish Parliament issued revised guidelines for HMO properties.

But other major councils, including Glasgow and Aberdeen, insist the new guidance does not require a blanket ruling.

They will continue to issue HMO licences on a case-by-case basis.