The maternity unit at the Victoria Hospital, Kirkcaldy, Fife, is above a busy entrance where visitors and patients regularly light up.

Clouds of cigarette smoke are wafting through the windows of the maternity unit and being breathed in by hours-old babies. 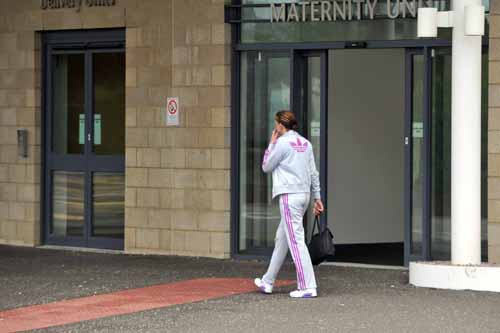 Senior officials at NHS Fife say they have a strict no-smoking policy at the site but admit it is “impossible” to enforce.

They are calling on the Scottish Parliament to legislate to ban smoking in and around hospitals.

Moira Adams, a member of NHS Fife, said she uncovered the scandal while talking to midwives.

She told a meeting: “I was horrified to hear that smoke is coming up right into the maternity unit where new born babies are gasping their first breaths.

“Can we not provide somewhere people can go and smoke so when windows are open it’s not going to go in somewhere?

“I’m not saying it’s an easy problem to solve, but everyone is talking about it and acknowledging it’s a problem, so can we not try and address the problem of smoke going up into the maternity unit.” 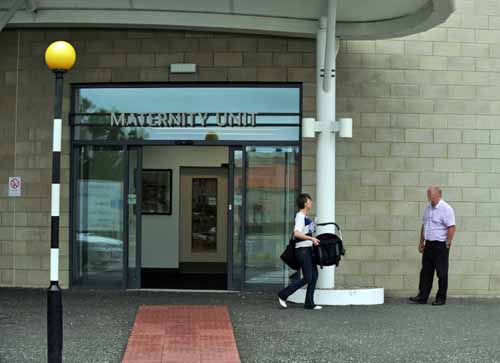 There is no dedicated smoking area at the Victoria Hospital

Dave Stewart, chairman of NHS Fife operations division, admitted he was “annoyed” by the problem.

He told the meeting: “It really annoys me when patients come down in dressing gowns and stand at the door smoking.”

In a reference to local football team Raith Rovers, he added: “If you go out there between 2pm and 4pm there are more folk out there smoking than at Stark’s Park on a Saturday afternoon.”

He added: “There’s no simple answer to it,” he said. “I have raised it with MSPs about smoking on acute hospital sites. The response was I should provide smoking shelters.

“What I wanted was for MSPs to pass legislation on smoking in acute hospital sites.”

Jim Leiper, director of estates and facilities, admitted it was “impossible” to make people obey the hospital’s ban on smoking.

“No one likes it and people are challenged. Some of them recognise what you are saying and extinguish their cigarette, but others just completely ignore you.

“We can ask but it’s impossible to enforce it.”

Margaret Watt of the Scotland Patients Association called for a system of fines for people caught smoking outside hospitals to be introduced.

She said: “It has got to stop. Especially when it’s brand new babies, they don’t deserve it and they can’t speak for themselves.

“We should look at the possibility of verbal warnings followed by £60 fines, with the money to go back to the NHS.

“This is the only deterrent which is left to us Everybody should be allowed to live in a smoke free environment.”

Kirkcaldy couple Johnny Lithgow and his wife Lisa were forced to endure the smoky wards of Victoria Hospital at the end of June for the birth of their son Harry.

The new dad suspected that despite his wife’s complaints, the staff were pretending not to smell smoke.

He said: “Smokers hang about the doors and you have to walk through them to enter the building.

“You can smell it in the maternity ward no problem – I guess it’s coming in through the windows.

“I feel really disappointed by the NHS that we had to put up with it. My wife complained but nothing ever happened – it’s like the staff pretended not to smell anything.”

Another  man, his pregnant partner and their three-year-old boy were visiting Victoria Hospital for a pregnancy check-up today.

The dad, who wished to remain anonymous, said that in his experience even expectant mums could be seen smoking outside the building.

He said: “When the little one was born nearly three years the old building entrance was rife with smokers. Here it’s no better.

“You can’t avoid the smokers here – sometimes you even see young mums who are just about give birth having a fag.

“It’s disgusting – they should ban it outright.”

Gillian Smith, Director of the Royal College of Midwives in Scotland, urged the hospital to make a direct appeal to smokers’ consciences.

She said: “If the hospital brought it to people’s attention that their smoke was going in the maternity ward then I’m sure it would be enough to halt the smoking outside the building altogether.

“Yes it’s difficult to police but if people are made aware then it should be easier to stop people smoking anywhere in the hospital.

“I’m sure that mums, dads, aunts, uncles and grandparents who visit will stop smoking it doesn’t matter how much you clean up after a cigarette the chemicals linger and babies will still be at risk.

In 2010 the Royal College of Physicians published a report that said “passive smoking is a significant cause of morbidity and mortality in babies and children.”

The Victoria Hospital, which cost £170m to build and opened early this year,  has received on average 11 formal complaints a week.

In one case, a 25-year-old mother gave birth on the frozen pavement outside the maternity unit, later claiming midwives had failed to answer the buzzer for several minutes.