A PEDIGREE puppy has been reunited with its family after being handed into the police.

The owner, Fran McNicoll, was shocked to find her beloved pooch, Nellie, had been stolen from the family car yesterday morning around 10.30am.

The 12-week-old Hungarian viszla was sitting in the car at Ninewells hospital car park while Fran’s 12-year-old daughter was having her cast replaced on her broken arm. 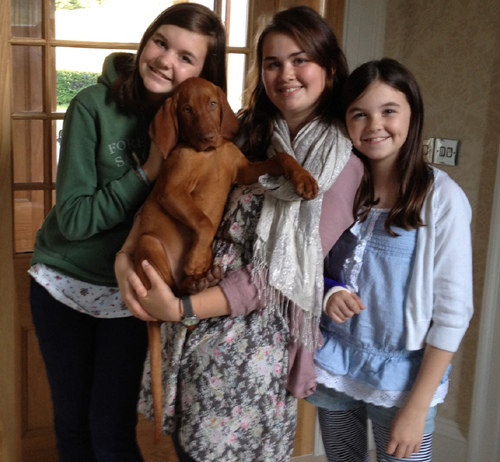 Nellie was re-united with his family.

When they returned to the car Nellie was missing.

Fran said: “I thought we would never get her back.

“I just couldn’t believe it.

“My two other daughters were with me too.

“They (the thieves) had just unleashed her in the car and taken her. I had to leave the car unopened because she sets the car alarm off.”

Fran worried that whoever took Nellie would sell her on as she is a pedigree dog.

Police were called to the car park after the family made the discovery. Inquiries were made at the A&E reception.

Fran said: “It was so unbelievable, so shocking that someone would take her in a hospital car park.”

Almost 7 hours later a member of the public had handed Nellie into Longhaugh police station after finding the puppy wondering around by itself.

Fran said: “It’s great news. She was handed into a police station on the other side of Dundee.

“We are so thankful to the member of public who handed her in.

“We think she was taken at about 10.30am and we got the call from the police at 5pm saying she had been handed it.

“She was taken from one side of the city right across to the other and just dumped.

She explained: “Nellie was quite wet when we got her back and very, very tired.

“It is obviously quite a scary thing though being with other people and then dumped at the other side of Dundee. She was taken from one side of the city to the other.

“We are so thrilled she is now home. I didn’t expect to get her back.”

Sally, Fran’s 17-year-old daughter said Nellie was now back to normal after her adventure.

She said: “She’s absolutely fine, she’s sleeping on my sister’s knee now. We are so delighted to have her back.”

Fran claimed it will take at least 2 weeks before CCTV footage from the hospital’s car park will reveal who exactly took Nellie from the family’s car.

Hungarian viszla’s are known as very affectionate and caring dogs that quickly form strong bonds with their owners and families. They are also natural hunting dogs with great training skills and capabilities.