SOME of Scotland’s rarest seabirds are under threat after the European Union’s controversial decision to ban fishermen from dumping unwanted fish.

Last week, EU countries voted to ban the discarding of millions of tonnes of dead or dying fish, which are thrown back to sea because they have been caught in excess of strict fishing quotas.

But animal experts warn that the move, which was meant to safeguard fish stocks in the long term, will reduce the populations of rare birds, including great skuas, which now rely on the discarded fish as their main source of food. 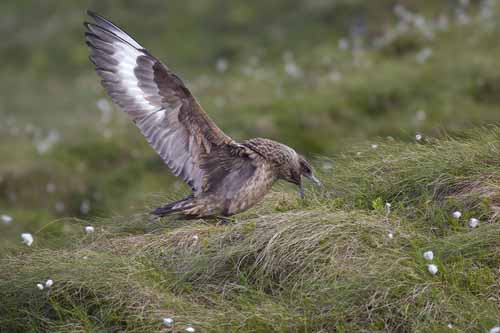 There are only 16,000 great skuas left on the world, with the vast majority living in Scotland.

For decades they have relied on cast-off fish since overfishing reduced the numbers of sandeels – their natural prey.

Bird experts also warn that phasing out discarded fish could also threaten other endangered seabirds, as skuas could switch to kill smaller birds for food – particularly the black-legged kittiwake.

Environmental groups are urging the Scottish Government to designate a network of marine protected areas around the coastline to protect sandeel stocks and provide more natural food for species such as the skua.

“It won’t be like turning off a tap (because the ban is being phased in) but there will be some areas where some species may find it difficult for a while.

“Great skuas are generalist feeders so they may switch to feeding on other seabirds, which is a real concern at a time when other species are already under threat. Kittiwakes are an iconic bird that has already suffered massive declines.”

She added: “Seabirds are such an important revenue-earner when you think about where people go to see these birds, like the Northern Isles. The ban is absolutely essential to the long-term stability of the ecosystem but we also have to make sure that seabirds are properly protected.”

The Scottish Wildlife Trust (SWT) echoed calls for improved safeguarding of Scotland’s seas and better fishing practice to restore natural food sources such as the sandeel to help birds survive.

Alex Kinninmonth, SWT marine policy officer, said: “We have to welcome the agreement that will bring about an end to the wasteful practice of discards. But rather than mourn the loss of this unreliable food source for scavenging seabirds such as the great skua, we must now look at improving fisheries management to ensure that other prey are available and a natural balance is restored.

“Marine protected areas that safeguard sandeel are also vital if we are going to recover the health of our seas and retain iconic species.”

Studies have shown that large numbers of great skuas, which mainly live in Shetland and Orkney, have stopped breeding in recent years because of a lack of food.

Good breeding years for the birds have also been found to coincide with a fall in survival rates of black-legged kittiwakes in Shetland.

Some of the steepest declines were in the far north of Scotland, particularly in Orkney and Shetland where around a fifth of the UK population return to breed each year.

The ban agreed last week by European fisheries ministers should end the waste of an estimated million tonnes of unwanted fish each year.

Fish are thrown back because they do not meet quota restrictions on the size, amount and type of fish allowed to be caught and sold.

The practice of discarding dead or dying fish will be completely outlawed in European waters from 2019.