AN investigation into the deaths of 30 Scottish children in care has found that potential warning signs of suicide were not recognised.

The report said local councils responsible for the care of vulnerable children almost always concluded that the tragedies could not have been foreseen.

But watchdog the Care Inspectorate  concluded that most of the youngsters had threatened to self-harm or actually injured themselves before dying.

The report examined the deaths of “looked after” children between 2009 and 2011 as a result of suicide, natural causes, accidents and violence.

The period includes the tragic deaths of two teenage girls in care who leapt from the Erskine Bridge near Glasgow in a suicide pact.

The report also reveals a huge and unexplained spike in deaths of children aged one to 17 in care in 2009 when 18 died.

Over the three years, eight died of “life-limiting conditions” and seven died of other “health issues”.

There was one murder, one “unknown”, three related to drugs or alcohol, five accidental deaths, and five suicides.

The Care Inspectorate report concluded in relation to suicides: “Where a child had died as a result of intentional self-harm the local authority nearly always concluded the circumstances of the child’s death could not have been foreseen.

“However we saw evidence that most of the children in this circumstance had made threats of self-harm or had previously harmed themselves.

“Staff or services working with the young person did not always recognise risk factors such as the suicide of a parent or close friend.”

The report continued: “We found effective services in some but not all areas of the country for young people who self-harmed.

“Young people in this group had attended A&E departments following overdose and self-harm.

“We found that in some areas accident and emergency staff had not referred the children and young people for further assessment to the child and mental health services team.”

The report defined “looked-after” children as those in local authority care, some of whom are allowed to stay at home with the remainder fostered, adopted, in residential schools, care homes or secure units.

On the accidental deaths, the report said a “small number” happened on the road or railway and there were three fatal cases of substance abuse.

“This was not considered intentional self-harm, rather they were living chaotic lifestyles and appeared not to have fully realised the risks,” stated the report.

The Care Inspectorate recommended that looked-after children should have access to information on the risks of substance abuse.

Only around half of the children who died as the result of terminal illnesses received “high quality end of life care”, according to the report.

It stated: “We have found variable responses to planning for palliative and end of life care…we rarely saw evidence of multi agency care planning.

“This meant that the day-to-day carers as well as the child and family may not have been kept informed of changes in the child’s condition.”

Seven of those who died were aged four and under, with the youngest aged one.

The highest number of deaths occurred in a residential care environment (12) with 11 deaths occurring while living at home or with relatives.

Four died in foster care, two died as registered homeless while residing in supported accommodation – only one died while being looked after in a secure care unit.

In October 2009, teenagers Niamh Lafferty, 15, and Georgia Rowe, 14, died after jumping more than 100ft from the Erskine Bridge.

They were both residents at the Good Shepherd Centre in Bishopton, Renfrewshire – a unit for vulnerable girls between the ages of 12 and 18.

In May last year a fatal accident inquiry (FAI) deemed that the deaths could have been avoided if the pair been housed in the main open unit at the centre and not in a “self-contained flat on the ground floor directly opposite an unalarmed fire exit door”.

In her FAI findings, Sheriff Anderson noted “there was no accident. Both deaths were suicides.”

Annette Bruton, Chief Executive of the Care Inspectorate, said: “The death of any child is a traumatic experience for families, carers, friends and relatives. It causes great pain and suffering for everyone involved so in order to learn lessons, we must understand the circumstances in which looked after children die.

“In some cases, lack of co-ordination means things are at risk of slipping through the net and looked after children find it harder to access the services they need.” 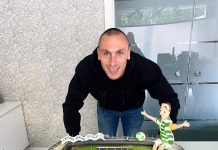