A filmmaker who struggled to get dates because of his red hair seems to have found love after making a £30,000 documentary about being ginger.

Scott Harris, who is based in Edinburgh, began his journey to find the “mythical” woman who liked men with red hair in Scotland’s capital.

A film of his struggle to find love, which took him to a redhead festival in the Netherlands, has been released today. 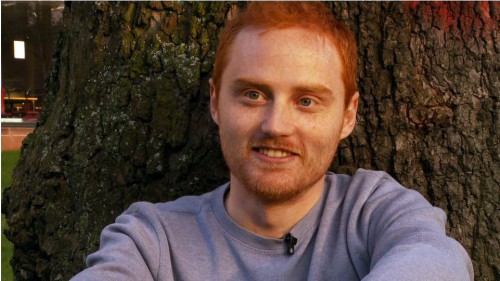 Being Ginger cost Scott £30,000 to make, including £8,000 he raised through donations from wellwishers online.

The filmmaker said being ginger was more of an issue in Scotland than his native US.

Scott, 32, who was born in California and has lived in Texas said: “I moved through to Scotland four years ago.

“I noticed strange things were said or happened in public.”

One memory sticks out for Scott: “I was sitting in a cafe having a coffee with this cute French girl.

“A man just came up and pointed at me saying ‘you aren’t dating a ginger are you!?'”

He continued: “At the ECA [Edinburgh College of Art] I needed a graduation film. I was sharing stories with my friends and they begged me to turn it into a film.”

“I didn’t want to do a film about my hair at first. But it occurred to me that throughout my entire life my female friends would say they had a friend with red hair.

“But it was always just a friend.”

He said: “[being ginger] is a bigger issue in Scotland, people taking the mickey, that surprised me.”

He raised £30,000 to turn his graduation film into a full-length feature, and is now hoping to have it shown in theatres.

Scott said: “I’m hoping enough people will buy the film from my web site so that I can clear the debt, pay my friends, and make another film.”

The film begins with Scott interviewing women in Edinburgh’s Meadows park – under the guise of making a film about red hair he is also trying to find his perfect match.

He explains at one point in the film: “redheads don’t date redheads.”

But when asking women for their thoughts on ginger men, comments he receives include “often men with red hair are uglier than women with red hair,” “[they’re] not the greatest to deal with women” and “nerdy.”

He later travels to the Roodharigendag festival in the Dutch city of Breda, where thousands of redheads gather each year to celebrate their hair.

But he later breaks his own rule, after he falls for a redhead from Florida named Emily.

At the end of the film he reveals the pair have made tentative plans to meet in the future.

Scott is now in Ireland for the Cork Redhead Convention, where his film will have it’s premiere.

He attended Scotland’s first redhead parade in Edinburgh earlier this month, which was lead by comedian Shawn Hitchins.

Later this month ariline Flybe will attempt to break an unofficial world record for most gingers on a plane on a flight from Inverness to this year’s Roodharigendag festival.