EDINBURGH has been named the fourth most-congested city in the UK – even worse than London.

Drivers in the Scottish capital can expect to waste 86 hours a year stuck in traffic, compared with 84 in London.

Beaten only by Belfast, Bristol and Brighton, the latest TomTom Traffic Index shows the worst times for queuing in Edinburgh are Tuesday mornings and Wednesday evenings. 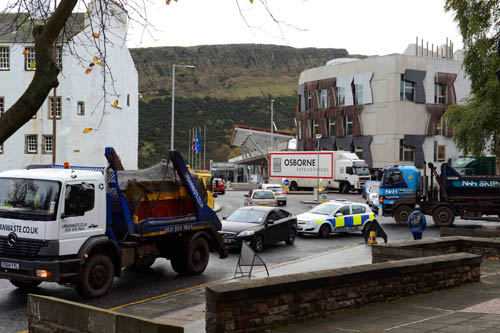 Drivers in the west have it slightly easier, with Glasgow congestion coming 16th in the UK list.

But Edinburgh, with its tram works and compact city centre, is driving hell. Motorists can expect to suffer 36 minutes’ delay for every hour they travel during peak times.

In the morning rush hour,  journey times are 53% longer than in “normal” traffic conditions.

Trips home are even worse, being 66% longer than in  free-flowing traffic.

Glasgow drivers suffer an extra 42% on their journey in the morning and 44% at night.

Londoners, who pay a congestion charge for travelling into the central area of the city, suffer an average delay time per hour of 35 minutes – one minute less than Edinburgh.

“The traditional responses to tackling congestion, like building new roads or widening existing ones are no longer proving effective. The way traffic is managed needs significant change.”