A HORSE suffered a terrifying 12-hour ordeal after an “idiot” left a gate open, allowing the animal to get trapped in a wartime shelter.

Four-year-old Dolly had escaped from her field at Kinfauns, Perthshire, after the gate was left open on Sunday morning.

The mare then fell into a ditch, leading to a wartime bomb shelter.

Owner Hannah Pedgrift, was alerted to the horse’s escape at 4:30am after police called the farm to alert them that their other horses were on the road.

But it was then that the 18-year-old noticed her beloved Dolly was missing.

Eight hours later a neighbour called saying they had found the horse alive but that she was in a rather sticky situation – trapped in the entrance to the shelter. 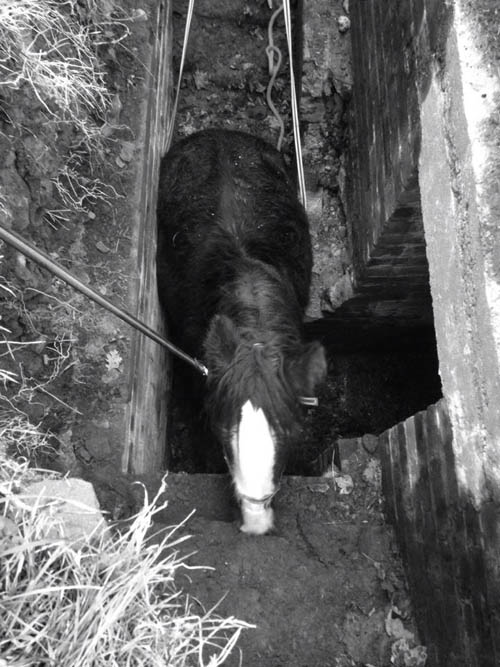 Miss Pedgrift has hit out at “idiots” who she believes opened the field’s gate deliberately and says they didn’t “think of the consequences”.

She said: “I think it was deliberate – someone’s opened it on purpose.

“They’re idiots but I don’t know if they were doing it for a joke or if they intended to hurt someone.

“It makes me angry that they haven’t thought of the consequences. We are so lucky Dolly is still alive and is out safe – it could have been a lot worse.” 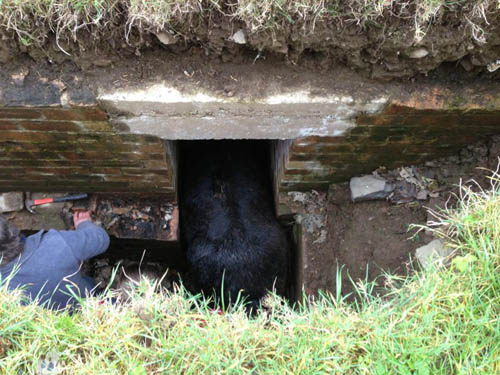 The youngster said that when she saw that the gate was open and the rope was gone, she thought her pony had been stolen.

“I was really relieved when we found her but when I saw where she was stuck I was worried about getting her out safely and alive.”

“She had fallen in and I think she got a bit of a fright and ran forward into the door, which was at right angles, and couldn’t get out.”

During the desperate rescue attempts, part of the shelter’s wall was broken to reach the horse before Hannah, her Dad and three friends attempted to lure the horse out.

Hannah said: “We put a lunge line round her back legs, her bum and hips and put a bit of pressure on her head.

“She had to walk backwards up the steps because we couldn’t get her facing forward – she sat on her bum and had a rest before she went up.

Dolly is now back in her field and is none the worse for her ordeal.