A THERAPY dog for hospital patients suffering from dementia has been banned after it became “overeager” with staff who offered it treats.

Molly, a seven-year-old Labrador, is no longer allowed to interact with patients amid hygiene concerns at Western Isles Hospital, Stornoway.

The ban was revealed in a report by the  Healthcare Environment Inspectorate (HEI), who also recommended any future therapy pets be part of a recognised scheme. 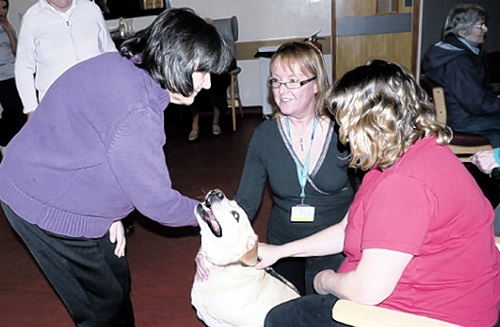 A previous HEI report in May this year had demanded the health board implement a policy for animal therapy visits which had “sufficient control measures to reduce the risk of infection to patients.”

Molly was brought to the hospital’s Clisham ward so elderly dementia sufferers could have the chance to pet her to reduce feelings of anxiety.

An HEI report published Mon Monday said inspectors had discussed the animal policy with staff at the hospital during an unannounced inspection on 8 October this year.

The report said: “The dog that currently visits the hospital is not registered with an approved scheme, such as ‘Pets as Therapy’ or ‘Therapet’.

“Some of the staff we spoke with were concerned about the current dog that visits the hospital as it had been overeager with staff when they offered it treats.

“As a result, staff had stopped all patient interaction with the dog.”

The report recommended future visiting pets be part of the “Therapet” or “Pets as Therapy” schemes to ensure the animals had the proper health checks.

It also recommended NHS Western Isles discuss the use of therapy pets with other health boards.

The HEI also issued a “high priority” requirement for the health board to implement a new policy for decontaminating nasendoscopes – probes inserted into patients’ noses.

Valerie Macleod, 66, said she brought Molly to the hospital as the Labrador had helped her recover from cancer.
She said the hospital had stopped her from making further visits with Molly in recent months: “They said it was because she wasn’t a therapy dog.
“But I never claimed she was a therapy dog. They also said it was for health and safety and lots of other things.
“They could have dealt with it with more compassion.”
Mrs Macleod said patients on the ward appreciated Molly’s presence: “They didn’t talk because of their illnesses, but you could see it in their eyes.”
She said Molly was a “very placid” dog.

NHS Western Isles last year announced they were introducing a “visiting therapy dog” at the 116-bed hospital in the hope she would boost “calm and wellbeing” among patients.

Janine Mackenzie, a staff nurse in Clisham Wars, said in December last year: “We are delighted that Molly will be coming to visit the patients on a weekly basis.
“There are a number of benefits to having a therapy dog, not least the pleasure it gives to the patients and the possibility of increased physical activity from even throwing a toy or a ball or getting up to pat Molly.
“The introduction of therapy pets has also demonstrated improved cognitive and daily living skills, as well as social, special and motor skills.”

A spokeswoman for the health board said: “In light of the HEI visit, NHSWI reviewed its arrangements for the introduction and use of therapy pets, and only pets registered with approved schemes will be used as therapy pets.

“Molly was not owned by NHSWI and was a personal pet of a member of the local community.”