A SCOTS sailor whose attempt to sail around the world single-handedly ended with him being rescued by the Chilean navy has spoken of his shock at his mast breaking.

Andrew Halcrow, from Shetland, was left stranded on the 31ft Elsi Arrub to the West of Cape Horn at the weekend and had to be airlifted to safety.

In a blog post on his website he has thanked his rescuers and told of his incredible ordeal, explaining he has specially rigged the sailing vessel to have a strong mast.

The voyage was the 54-year-old’s latest attempt to sail around the world, he had to be rescued in 2006 off Australia when he was hit by a crippling bug while on a similar trip.

Mr Halcrow said: “Part of me can still hardly believe what has happened. If there was one thing I was sure of before leaving it was that the mast was really well rigged and would stand up to some severe weather.

“I had huge confidence in it and it was one of the things I never worried about because it had so many bits of wire holding it up.”

He said fearsome storms with six-metre waves has battered the ship over the weekend: “We had been hit twelve hours before, on the Friday night, by a massive wave, which threw us over.

“The worst one yet. It’s possible the shock load from that maybe weakened the mast as well.

“It was so brutal that at first I was sure a ship had rammed into us. If you had been in a car you would have thought a truck had slammed into you.”

He spoke of his shock at seeing the damage to the ship after he emerged from below decks: “I turned and looked forward.

“The mast was so strongly rigged I thought it would stand up to nearly anything.” 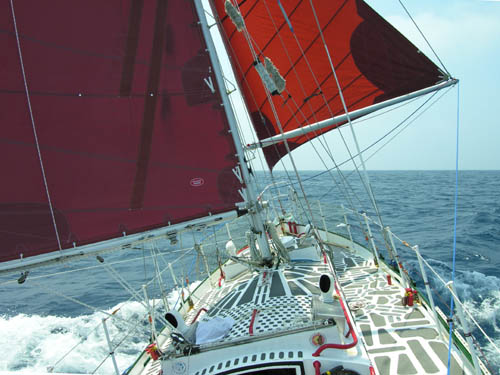 He then set about the painstaking task of removing the damaged rigging from the ship as the storm still raged.

As the radio antenna had been destroyed he had to call for help on a satellite phone, after phoning his family in Britain.

He said: “In time I spoke to Comandante Montez in Punta Arenas and he was my link with the Chilean side of the operation. We arranged a contact schedule.

“It was decided a helicopter would come out the following day to try and take me off.

“And that’s what they did. The next day the wind was down to about 20 –25 kts and the sea was a lot easier.

“The helicopter came over us at around 1000 and dropped a man onto the deck.

“The Chilean navy team that came out in the helicopter were excellent and did a very professional job.

“It all went without any problems and in no time at all I was being pulled up into the air, into the chopper and we were on our way to dry land.”

He continued: “The Chilean hospitality has been wonderful and I have been treated more like an honoured guest rather than a stupid yachtsman who has caused a lot of grief and work for those onshore.”

He added he was hoping the Elsi Arrub could be saved but noted the strong winds off the coast may make this impossible.