Sheeran was due to perform the second of his sell-out shows at the Hydro, Glasgow, last night.

Police covering the Govan and Craigton area of the city used twitter to give a well-intentioned crime warning to gig goers. 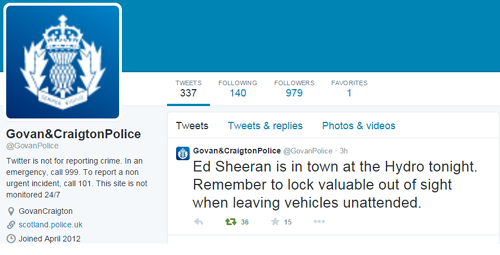 Officers tweeted: “Ed Sheeran is in town at the Hydro tonight. Remember to lock valuables out of sight when leaving vehicles unattended.”

Followers could not resist joking about Sheeran’s alleged sideline as a master criminal.

?Grievesy Dundee asked: “Do you have inside info? he’s always looked the shifty type to me, thanks for the head up. wink wink.”

Another comment on the post read: ”This is state-sponsored gingerism of the worst type and I, for one, will no longer stand idly by as it is espoused!

Another joked: “That Ed Sheeran is notorious for going out on the rob”

The originators of the tweet remained tight-lipped following their blunder.

Sheeran himself declined to respond to requests for details about his career beyond the law.

The redhead singer songwriter is currently in the middle of a sold out European tour to promote his second album titled ‘X’ which was released in June and has gone on to sell almost 2 million albums so far.

Police Scotland later said they did not intend to brandish the singer a criminal while unfortunately misspelling his name in the process.

A police Scotland spokeswoman said: “Due to its wording, the Tweet could be misinterpreted; however, there was obviously no intention to personally link Ed Sheerin to your car getting broken into!

“We always provide crime prevention advice to the public at major events as we don’t want your night ruined by having your car broken into and your valuables stolen.”