Teenagers are much more likely to take up smoking if they live in neighbourhoods with a large number of shops that sell tobacco products, a study suggests.

A joint study from the Glasgow University and the University of Edinburgh has found that adolescents with the most tobacco outlets in their neighbourhood are almost 50% more likely to smoke than those with no outlets nearby.

The study also found that teenagers living in areas with the highest density of retailers are 53 per cent more likely to try smoking at least once. 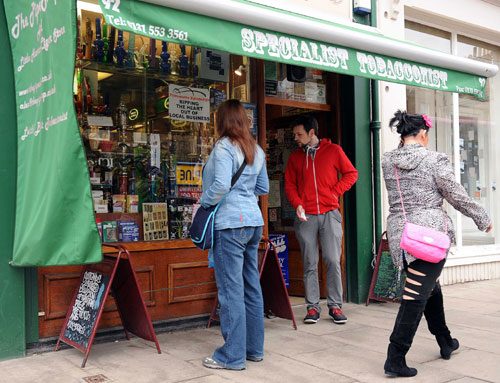 Researchers argue that anti-smoking strategies targeted at teenagers should include reducing the overall density of tobacco retailers. They say that limiting teenagers’ access to tobacco products is vital, as long-term smoking usually begins in adolescence.

Tobacco control policies often prioritise the reduction of outlets in specific areas, such as neighbourhoods near schools. However, researchers found no evidence that adolescents attending schools in areas with high numbers of tobacco shops are more likely to smoke.

The study of Scottish teenagers – the first of its kind in the UK – examined the relationship between adolescent smoking habits and tobacco outlet density in teenagers’ home and school neighbourhoods.

Teenagers living in all neighbourhoods – not just those with levels of high poverty- were found to be affected.

Researchers at the Universities of Edinburgh and Glasgow created a map of tobacco retailers for every postcode in Scotland. They examined the links between the number of outlets and teenage smoking habits using responses from a survey of more than 20,000 school pupils aged between 13 and 15.

Dr Niamh Shortt, Senior Lecturer in Human Geography at the University of Edinburgh, who led the study, said: “The Scottish Government has signalled its intent for a ‘tobacco-free’ Scotland by 2034.

“Our research shows that as part of this plan we need to consider regulating the number of retailers selling tobacco in our neighbourhoods.”

Professor Richard Mitchell, Professor of Health and Environment at the University of Glasgow, said: “We were surprised by how strong an influence the retail environment was on teenagers’ smoking behaviour. The results are good news because they offer a new tool with which to try and reduce smoking rates.”

The study, published in the journal Tobacco Control, was supported by the Scottish Collaboration for Public Health Research and Policy. The work was coordinated by the Centre for Research on Environment, Society and Health.