THE ROYAL NAVY had to scramble a search and rescue helicopter to get a sick baby to hospital after snow storms left the mother and child stranded.

The one-year-old, who had taken ill and was described as ‘unresponsive’ at the scene was airlifted to hospital in Carlisle by Flight 177 based at HMS Gannet, Prestwick.

The alarm was raised by the child’s family earlier this morning at their remote farmhouse near Whisgills in the Scottish Borders. 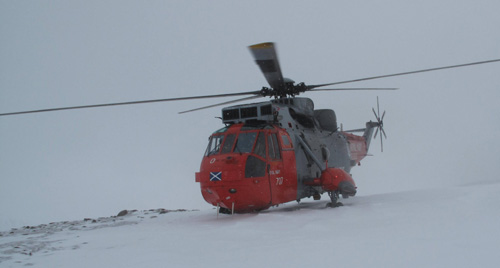 Emergency services attempted to reach the baby however a local ambulance became stuck en route, and Glasgow’s Air Ambulance helicopter was not given permission to fly due to driving snow showers sweeping west and central Scotland at that time.

A local GP managed to fight his way through to the house and provided excellent primary care while waiting for the helicopter.

The Royal Navy’s SAR 177’s Sea King Mk4 helicopter was deployed and managed to get through the dangerous conditions to reach the sick child and his mother.