A MILESTONE in what has been described as the transformation of Edinburgh’s Old Town is set to be reached this month.

Construction work is due to begin shortly on a link between the New Waverley development and city’s historic Royal Mile.

Artisan Real Estates Investors’ £150m project is continuing with a146-apartment Adagio Aparthotel which will face directly on to the Royal Mile, behind a retained façade of the C-listed Sailors Ark building. 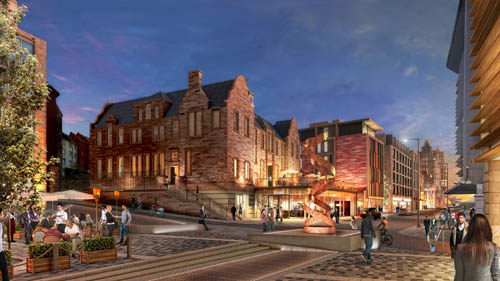 This development phase also includes retail, restaurant and bar opportunities on the ground floor of the Aparthotel.

Once completed, the Aparthotel will overlook a new £6.5m public square, also delivered as part of this phase of works, creating a vibrant central hub for New Waverley.

Construction work on the initial development phase of two Whitbread hotels with frontages on to East Market Street and Cranston Street is already underway.

Clive Wilding, Artisan’s Project Director, said: “The breakthrough to the Royal Mile marks a significant stage in the evolution of New Waverley, and its transformation of Edinburgh’s Old Town and the entire city centre area.”

He added: “We are working closely with the City of Edinburgh Council to create a community partnership to breathe new life into the area, using recently released funding.

“This includes arts projects such as the graffiti-based artworks on site hoardings and community events throughout the year.”