Tom Boyd insists he would happily relinquish his Germany bragging rights if it paves the way for Scotland to end their agonising exile from major tournaments.

Boyd, who won 72 caps for his country, was in the starting XI that last time Scotland tasted victory against the Germans, emerging from the friendly in Bremen with a clean-sheet.

A clinical low drive from Don Hutchison secured a 1-0 win for the visitors back in 1999.

While the current World champions are a very different proposition from the side which lined up at the Weserstadion 16 years ago, a similar result would be a massive boost as Scotland attempt to get their Euro 2016 campaign back on track.

Boyd said: “I’d happily give that record up if it means the current team can get a win over Germany.

“More importantly, I’d like to stop being able to say I was in the last squad to reach a major finals (France 98). We want to get back to Scotland being regulars at international competitions.

“I do believe we enhance it when we go abroad and take part in these tournaments.”

Thomas Muller, Mesut Ozil, Bastian Schweinsteiger and co. represent an onerous challenge, but Boyd is adamant Gordon Strachan’s side must take confidence from their brave defeat in Dortmund in September.

A wonderful, and deserved, equaliser by Ikechi Anya levelled the scores at 1-1 and Scotland seemed on course for an unlikely point. However, a scrappy Muller goal secure the victory for the hosts.

He continued: “I thought we were really unlucky in the first game against Germany and we don’t generally do too badly against World champions, looking back to Stewart McKimmie’s goal against Argentina which got is a 1-0 win back in 1990.

“The harder game of the two to prepare for would probably have been the Georgia game, in terms of the expectation and pressure involved. With the occasion at Hampden, Germany takes care of itself.”

Before turning his attention to Hampden tomorrow, Boyd is gearing up for his own return to action at East End Park this afternoon.

The former Motherwell and Celtic defender is part of the Hoops legends XI which will face their Dunfermline counter-parts to mark the 30th anniversary of Jock Stein’s passing.

As well as paying tribute to an icon of both clubs, the match – which kicks-off at 2 p.m., with a cash turnstile in place – will see Boyd enjoy an unlikely reunion with Vinnie Jones.

He smiled: “I’ve played alongside Vinnie – at Chelsea. That was way back in 1991 when I think he’d just left Wimbledon to join Chelsea so it will be great to see him again and rekindle that.

“I’ll see if he’s changed and if he’s mellowed with his acting career. His acting career is playing hoodlums and criminals – but when he played football he wasn’t acting . . . he was taking that seriously.” 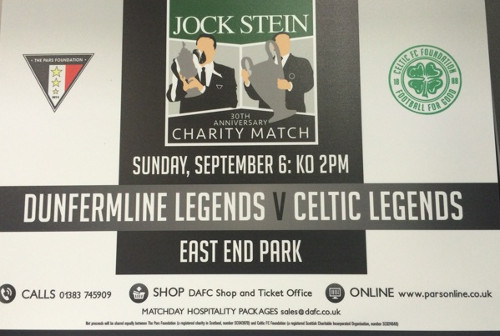