How do we know the difference? Cops slated after taking mannequin challenge

POLICE Scotland have been ridiculed officers took the “mannequin challenge” – and viewers asked how would they know the difference?

The social media craze involves groups of people uploading a video of themselves looking as if they are frozen in time.

Seven polie officers from the Falkirk Community Team took up the challenge and posted a video on their Facebook page.

An officer is then shown frozen to the spot as he points to the projector screen which reads: “Your view counts. Keeping people safe.”

As the camera goes round the room another officer in a Police Scotland vest is shown pretending to write notes while the other five are “frozen” while polishing their boots, drinking cups of tea and wearing full riot gear.

Hilariously, one officer appears to be poking fun at the police stereotype by holding a donut just inches from his mouth.

But the officers’ attempt to follow in the footsteps of singer Adele, Hillary Clinton and Destiny’s Child has received a very mixed response. 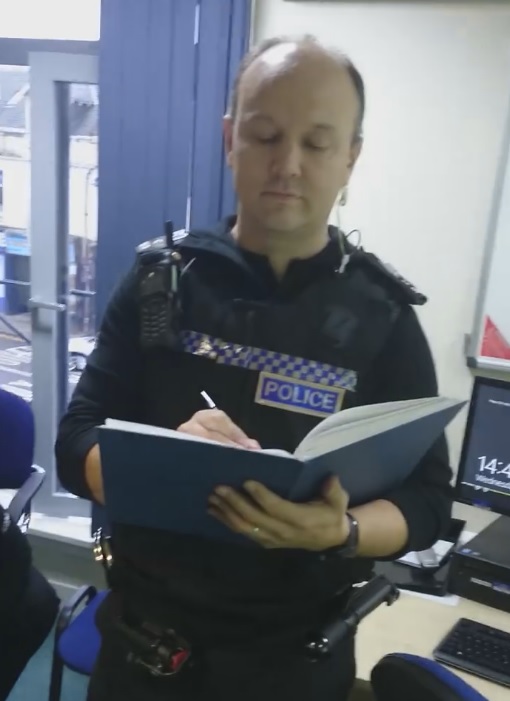 William McKenna said: “Working harder than they normally do.”

Scott Love wrote: “That’s how fast they move in their job.”

And Stevie Lee asked: “Why don’t you lot stop dicking about and get some work done.”

However, many Facebook users jumped to the force’s defence saying the video showed how they had a sense of humour.

Lisa Tracey said: “Great. Least you guys still got a sense of humour with the job you do. Well done putting yourselves up for a right slagging.”

Stuart Ward wrote: “Omg how dare they. Wise up they are doing nothing more than engaging with the community and showing a bit of humility.”

And Joanne Noble said: “Give them a break. When most people are running away from danger they’re the ones running towards it. Well done guys.”

Branded the new “Ice Bucket Challenge”, the Mannequin Challenge has become the latest craze to sweep the internet over recent weeks.

The challenge see’s people uploading videos of themselves, using the hashtag #MannequinChallenge while looking frozen in time.

The social media craze began in USA last month with most clips having music by Rae Sremmurd’s Black Beatles featuring Gucci Mane playing in the background.

UK national treasures Holly Willoughby and Phillip Schofield were some of the last celebrities to take part following in the footsteps of Bon Jovi, Adele, Beyonce and numerous professional athletes.