SCOTLAND’S most famous living scientist says his life has been ruined by selfies.

Nobel Prize-winning Professor Peter Higgs says he is frightened to visit his old department at Edinburgh University in case he is surrounded by students with smart phones.

The 87-year-old also said he would not attend the opening of a new building at the university which has been named after him.

And Higgs claimed he would be sacked by university bosses if he were working today because of his lack of interest in “run-of-the-mill” science problems. 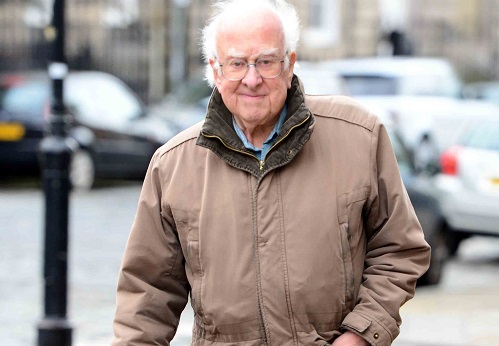 The academic suggested Edinburgh University only kept him on because of the chance he would be awarded the Nobel Prize for Physics, which was awarded in 2013.

Higgs was propelled to international stardom after his prediction of the existence of a subatomic particle – since subbed the Higgs Boson – was confirmed by experiment half a century later.

But in a rare newspaper interview, the scientist made clear the crowning achievemement of his career had come at a heavy price.

He said: “My life has been ruined by people recognising me on the street and wanting a selfie.

“It still happens on the streets of Edinburgh when I go out to do some shopping, and people are amazed that I’m visible going shopping. But I say, ‘I’ve been here 50 years’.”

Higgs added: “I hardly dare to go to the school of physics because a horde of students from the Far East will descend on me bearing smartphones.

“It’s made particularly difficult by the fact a portrait of me hangs on the stairway – they know what to look for.”

The theoretical physicist, who was born in Newcastle but has lived most of his life in Edinburgh, also revealed he would be “sacked” if he was starting out again now.

He added: “Today if you are an academic you have to handle things differently by showing more interest in run-of-the-mill research problems and being involved in them.

A new building at Edinburgh University – The Higgs Centre for Innovation – is due to open soon.

But Higgs complained: “Inspite of my never having any real connection with it, they put my name on it and my name shouldn’t be on it.

“I’m going to be embarrassed if they ask me to participate in the opening. I have to find a way of saying, ‘ I think you’ve named it after the wrong person.’”

The Higgs Boson – dubbed to many scientists’ intense irritation the “God particle” – was crucial particle physics because, without it, there is no explanation of why things have mass.

Higgs, in the interview, self-effacingly described confirmation of his theory in 2012 as “almost the end of it because I didn’t do much of interest afterwards”.
d the “God particle” – a term detested by physicians.

Famously, when the Nobel committee tried to get in touch with Higgs about the reward he chose to be uncontactable for the whole day.

He returned from the Nobel award ceremony on an EasyJet flight – despite the £775,000 prize money – and celebrated with a can of beer.