Domino’s investigate after US man finds giant bug in salad

PIZZA chain Domino’s are investigating after a man found a giant bug in his salad order.

Twitter user Michael Stern, from Maryland, US, tweeted on Saturday to show an image of the inch-long creature amongst some lettuce in his salad bowl.

Stern tweeted the image with the caption: “Hey Domino’s I didn’t know giant bugs were part of the salad order.”

Dominos then replied to the incident saying: “We take these matters seriously. Please use reference# 2774725 so we can assist.”

He later clarified that he had been asked to send it to their laboratory for analysis.

The bizarre image of the bug has since gone viral, being retweeted and liked over 5,000 times. 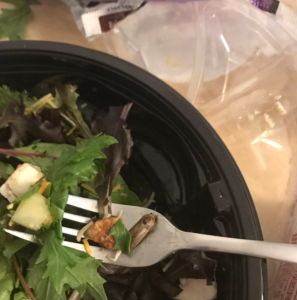 To many, the biggest surprise was that the chain sold salad.

One user, known as Kintaro, posted a picture of a very confused man, with the caption: “Domino’s sells salad?”

Whilst a user called AJ said: “When you order salad from Domino’s at least you know it’s a fresh salad.”

Another bizarrely asked: “Was the bug alive? Don’t kill it – I’ll buy it from you.”