‘Hibs an amazing place to be,’ insists Lewis Stevenson – one of FIVE players Neil Lennon has re-signed for return to the SPFL Premiership

LEWIS STEVENSON insists hs is glad to continue being part of an ‘amazing place to be’ after being joined by four team-mates in agreeing new contracts with Hibs.

Manager Neil Lennon has spoken of being keen to maintain ‘momentum’ after sweeping to promotion back to the top-flight and will be thrilled the club’s hierarchy have been able to trash out the agreements. 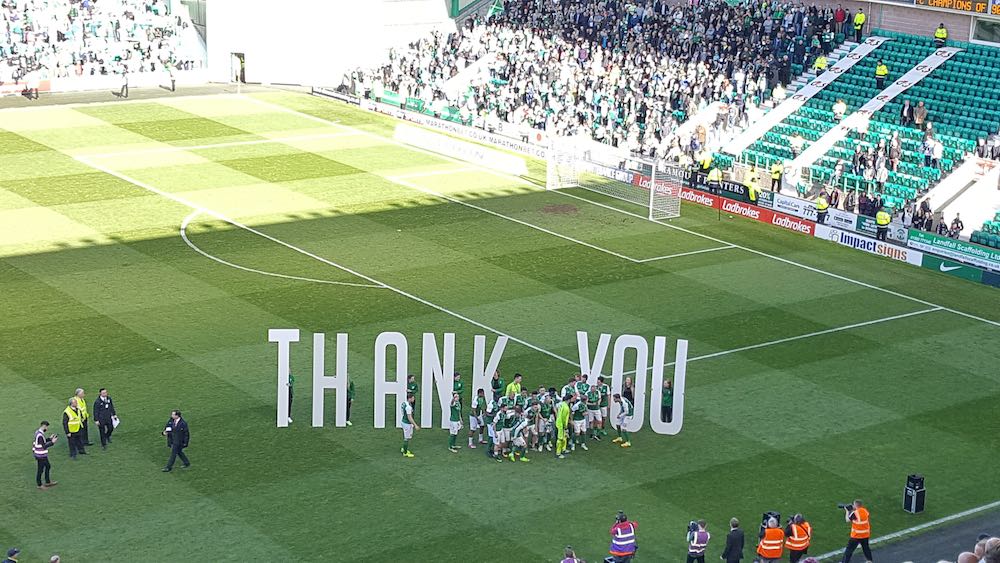 There remain some significant figures whose futures are uncertain, including veteran striker Grant Holt, midfielder Fraser Fyvie, defender Liam Fontaine and attacker Martin Boyle, who are all out of contract in the coming days.

Lennon has also revealed his hopes that the on-loan pair of Celtic defender Efe Ambrose and Israel keeper Ofir Marciano can return on permanent contracts for next season, whilst he has been linked with interest in bringing Scotland cap Steven Whittaker back to the club.

However, with James Keatings departing for Dundee United and the likes of Chris Humphrey, Brian McLean and Scott Gallacher only signed on short-term deals, the Easter Road boss will be happy to have got some business done early.

Stevenson is certainly content to have sorted his future so soon after the final game of the season against St Mirren at the weekend.

He commented: “It’s something I always wanted to do and as soon as the club told me they were interested I was delighted to get the deal done.

“It’s been an amazing couple of years and I feel the club’s really kicking on, and I’m glad I’m going to be a part of it for another couple of years.

“It’s a massive turnaround [since relegation], it almost feels like another club in some respects.

“The squad’s obviously changed a lot, the management’s changed, and the degree of success we’ve had in the last year has been fantastic.

“I think it’s just a taste of what this club can achieve. It’s an amazing place to be at the moment and I’m glad I can be a part of it.”

He added on Hibs TV: “Week-in, week-out it will be a tough test for us next season.

“It will probably be different in that I think teams will come out and have a go at us, but I think that will suit us.

“We’ve fared well over the last few years against Premiership opposition and I’m sure there’s going to be a few more additions that are going to strengthen the squad.”

Gray has captained the team for the past two seasons and wrote his name into the history books with his winning header in the club’s long-awaited Scottish Cup final triumph over Rangers 12 months ago.

In the same match, Stevenson became the only player to have won two cup medals with Hibs, whilst as a boyhood fan of the club McGregor has spoken repeatedly of his desire to stay for next season’s Premiership campaign.

Laidlaw proved an able deputy for Marciano when called upon, most notably in the Europa League win away to Brondy at the start of the season, and Bartley has been something of an unsung hero with his strength and power in the defensive midfield position.

Bartley said on social media: “I wasn’t born here but I feel at home and my team-mates feel like family.

“It was only right I stayed and set up home here for the next two years at least!”