A REALITY TV star has been revealed as a fan of a cult Scottish DJ who’s loved by club goers across the country.

Former Geordie Shore cast member Kyle Christie has declared his love for DJ Rankin in a video which appeared on social media.

DJ Rankin has been a staple of the Scottish club scene for a number of years, pleasing nightclub revellers with his mix of harcore songs.

And now, 24-year-old Kyle has announced he’s one of the legions of Rankin fans.

DJ Rankin shared a video of the reality star on his Facebook page with the caption: “Kyle Christie, Geordie Shore showing his support.”

The five second clip starts with the Geordie Shore star sitting in the front seat of what appears to be a taxi. 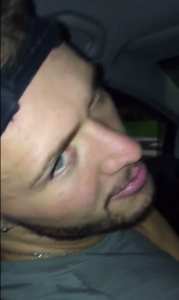 The footage, filmed from the back seat, shows Kyle looking back towards the camera before shouting: “DJ Rankin in the mix m**********r,” before another voice can be heard screaming.

DJ Rankin tours various night spots around Scotland and is famous for his ‘I am raver’ nights which have proved popular with clubbers, with many sold-out venues.

He has recently hit the headlines for a series of cosmetic surgeries.

As well as a recent hair transplant and nose job, the TV celebrity has also taken the unusual step of splashing out £9,000 on a beard transplant.

The 12-hour transplant will allow him to grow a facial stubble and grow out a thicker beard.