Is Begbie the inspiration for new Despicable Me villain?

LEGENDARY Trainspotting psycho Begbie may have inspired the newest baddie in the latest installment of hit movie franchise, Despicable Me.

Social media users have pointed out a striking resemblance between Robert Carlyle’s hellraiser and the new Despicable Me 3 character, Balthazar Bratt.

Posting a photograph of the box, alongside one of Begbie, one Twitter fan wrote: “Popular culture will never be the same again. 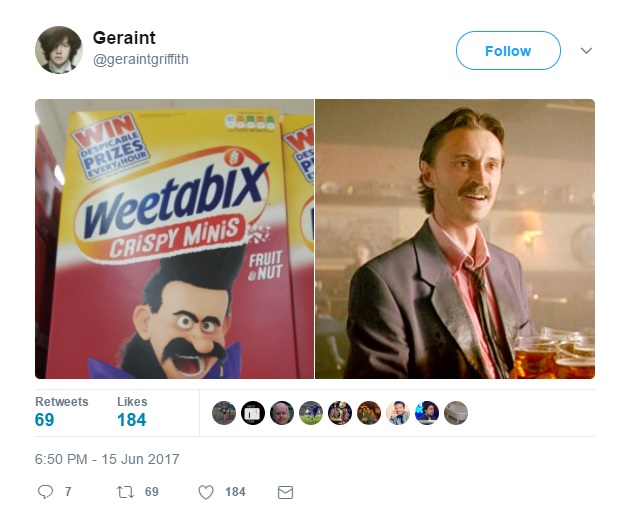 Another wrote: “Yes nuts being common to both.”

And another social media user responded: “THAT’S who it reminded me of. Thank you.”

The post, uploaded last night (THUR), has since been liked hundreds of times and retweeted by dozens.

Referring to one of Begbie’s most popular phrases, another Twitter user also posted a snap of the Weetabix box, writing: “That lassie got glassed, and no c*** leaves here till we find out what c*** did it.”

Bratt is the new, main antagonist of Despicable Me 3 and stars alongside main character, Gru, played by Steve Carell.

He was a former child star in the 80’s who starred in his own TV show “Evil Bratt” until it was cancelled when he reached puberty, aged 14.

He is also the long lost twin brother of main Gru who wants to team up for one last criminal heist.

Bratt is spotted throughout the film still wearing the outfit his character wore in the shows struggling to move on.

Francis Begbie plays a main role in the Trainspotting franchise, thriving on violence and losing control over his mood throughout the films.