AS a die-hard Celtic supporter, Anthony Stokes thought nothing would ever surpass his maiden title triumph with the Hoops.

That all changed when he inspired Hibernian to their first Scottish Cup win in 114 years and saw 150,000 fans lines the streets of Edinburgh

However, the returning hero knows his legendary status will count for nothing if he underperforms in his third stint at Easter Road – and Stokes has vowed not to rest on his laurels as he attempts to kick-start his career in the capital. 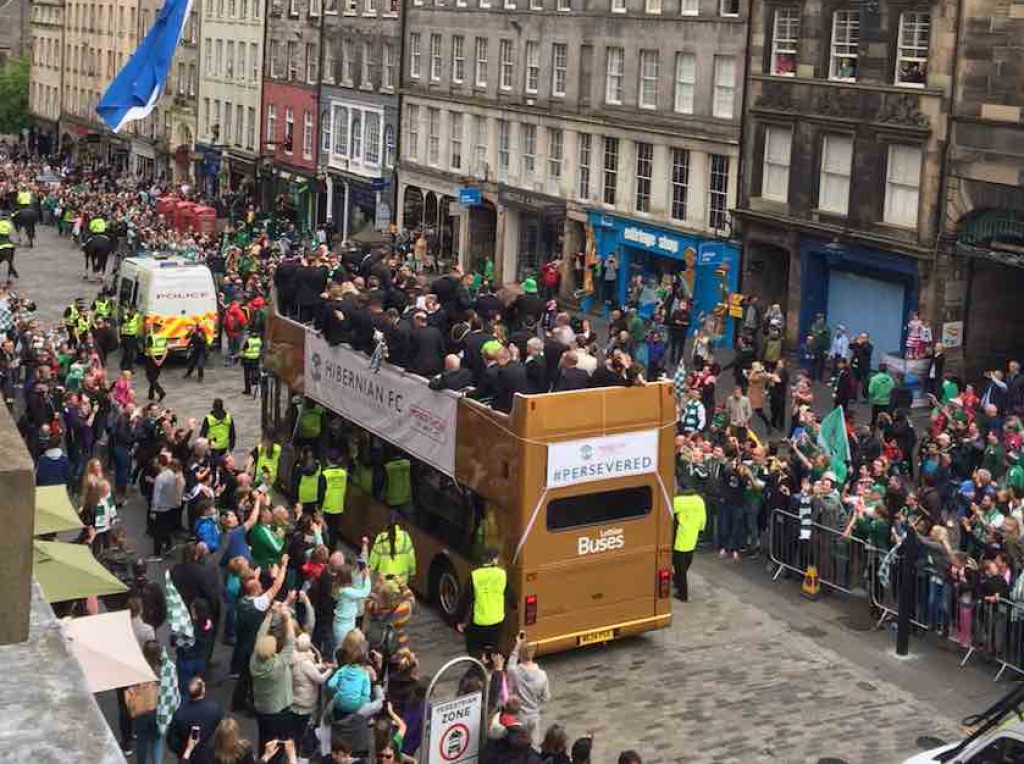 The Irishman has signed a two-year deal and his arrival has been lauded by the Hibs faithful, given his brace in the Hampden showpiece of May 2016 – claiming man of the match in a breathless 3-2 win over Rangers – still looms large.

Even for a man who lifted seven major trophies for his boyhood club, that weekend will always be a high watermark.

“Celtic has always been my club and it always will be,” smiled Stokes. “Winning the first league title with Celtic was probably the biggest thing I had done in my career; probably the happiest day of my life – but that [Hibs win] did surpass it in the end.

“I think it was just the scenes at the end that set it apart. The parade on the Sunday and seeing the supporters line the streets was incredible.

“I’ve never experienced anything like that in football before. That probably does top things and I never thought that would be the case.

“That Scottish Cup win is something that the Hibs fans will always remember, however if I go five or six games without scoring it will be quickly forgotten! That’s football.

“It changes week to week and I know I need to perform for myself, the manager and the team.”

It is impossible to underestimate the influence of Hibs head coach Neil Lennon in getting the deal done.

Stokes could have sought to line his pockets with a more lucrative switch abroad – he told Lennon as much – but in the end a reunion with the man who was in charge for 68 of his 77 goals in the colours of Celtic was too good to resist.

“This obviously took a while to get sorted,” continued Stokes. “I had to weigh up my options and I told the gaffer straight that I was considering going abroad but, for my football career and to get back on track, everything about joining Hibs was the perfect fit.

“I probably played the most consistent football of my career under Neil. I played week-in, week-out and he knows my strengths. He knows my weaknesses as well and I’m sure he’ll be able to get the best out of me.

“There has been a winning mentality at this club in the last two years, winning the Scottish Cup and getting promotion last season, and the gaffer has that same mentality from when he played. He hammers that into the players and he won’t let the standards slip.”

Stokes, who played just 12 games for Blackburn Rovers last season, will be in the squad to face Partick Thistle tomorrow and has declared himself fit and ready, adding “I trained with the guys on Thursday and I was a lot better than I thought I would be!”

And he sees no reason why the visit of the Jags cannot be the first step towards an impressive campaign for the Hibees following a summer spending spree that has seen Ofir Marciano, Steven Whittaker, Efe Ambrose, Danny Swanson, Simon Murray and Stokes arrive. It is a group that boasts 153 international caps between them.

“If you look at the strength of the Hibs squad – and hopefully I can add to that – we can have a real go,” said the former Sunderland, Falkirk and Crystal Palace man.

“The team is stronger than the one I left, with Efe [Ambrose] and Whits [Steven Whittaker] coming in, who are both good, experienced international players. That is combined with a good core of players who have a winning mentality from the Championship.

“Every game will be a must-win game in the eyes of the manager and I cant wait to get started.”