SHOW TITLE: One Step Before The Fall: Spitfire Company and Damuza.

THIS harrowing and powerful one-woman dance performance, portraying the agonising demise of boxing hero Muhammad Ali, is an evocative, sometimes hard-to-watch, take on the life story of the world champion pugilist and activist, and the personal fight he encouraged in all of us.

From the glory days of the Rumble in the Jungle and Thrilla in Manila, to the second big fight of his life, against loss of motor control as Parkinson’s Disease wreaked havoc in the hero, leading to his death last year, multi-award-winning dancer, Markéta Vacovská, takes us step by tragic step through an, at first joyful, and then increasingly uncomfortable biography.

I had read much about the fighter, whose intelligence, integrity and personality, more than matched his physical prowess in the ring, which gave me a good understanding of the dynamics here.

For those without this reference, the show might have been more confusing. Vacovská begins by removing her simple white shirt and earrings, defining her as an ordinary Joe, before limbering up to demonstrate the staggering potential of the human form.

Ripped as any man, lithe and strong, flexing and showing-off like Atlas before a feat, as Ali, ever the showman loved to do, it is refreshing to see so much power and destiny played out in female physique.

As we watch the persona of Ali deteriorate, we begin to understand the ultimate fragility of force and pushing or being pushed forward to prove greatness.

The gruelling gyrations and hamster-wheel repetitiveness of training regime, and celebrity, lashes Vacovskáagainst the ropes by the end, and, dripping with sweat, with fear in her eyes, I began to lose my sense of theatre and worry about the dancer herself. This was much more than a dynamic HIIT gym workout; Vacovská gives it her absolute everything. 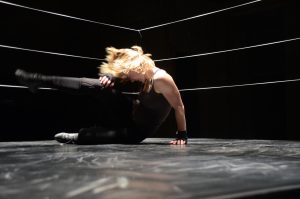 At the end of her ordeal she is as spent as any elite athlete pushed to the brink. Sweating, flailing, throwing herself against boxing ring ropes, so close to the audience that at times she is smack, uncomfortably in someone’s face; this is performance without boundary.

It is a fight against whatever you want it to be: the unfairness of life, the pain of loss, the struggle to keep up with expectation, the need to stay on top and finally, against death.

At the start of the show we hear the sad slurring of the poorly boxer, now a shadow of his former self, describing how he had always been in love with boxing, how changing his religion made him more popular and other snippets of a remembered life.

Then the voice of legendary Czech singer, Lenka Dusilová runs with the dance; at turns gently lullabying the damaged pugilist back to balance, at others screaming out his pain.

The audience look on in shock, at times frozen. This is compelling theatre indeed.

I would pretty much agree with the other critics that this is a must-watch show, if you have the stomach for it. Conceived by Vacovská , with theatre director of  Spitfire,  Petr Bohá?, both have a certain handle on the existential.

In these terms, the show displays raw genius; observant, gripping and energetic, it slaps-awake your own fight as the embers of Ali flicker and fade.

Barack Obama described Ali thus: “The man who believes real success comes when we rise up after the fall.”