A SCOOTER driver has been filmed struggling heroically to lash a kitchen stool to the back of his tiny vehicle – only to find the bike wouldn’t start.

The bizarre clip shows the determined Scot trying for over five minutes to work out how to transport the awkward item of furniture.

After trying what seems every possible combination, it seems success is finally at hand.

But in a cruel twist, the scooter refuses to start and the rider is eventually forced to push both bike and kitchen stool through the streets of Edinburgh.

The clip was filmed by Phil Lockwood last week and put online with the caption: “Only in Leith.”

The video begins with the unknown man, dressed in a black leather jacket, cream trousers and wearing a white helmet, sitting down and trying to work out if he can drive the scooter and hold the chair at the same time.

Realising he can’t, he gets off to try a different tactic. He turns the chair upside down with the legs sticking up in the air, desperately trying to balance it on top of the scooter’s seat. 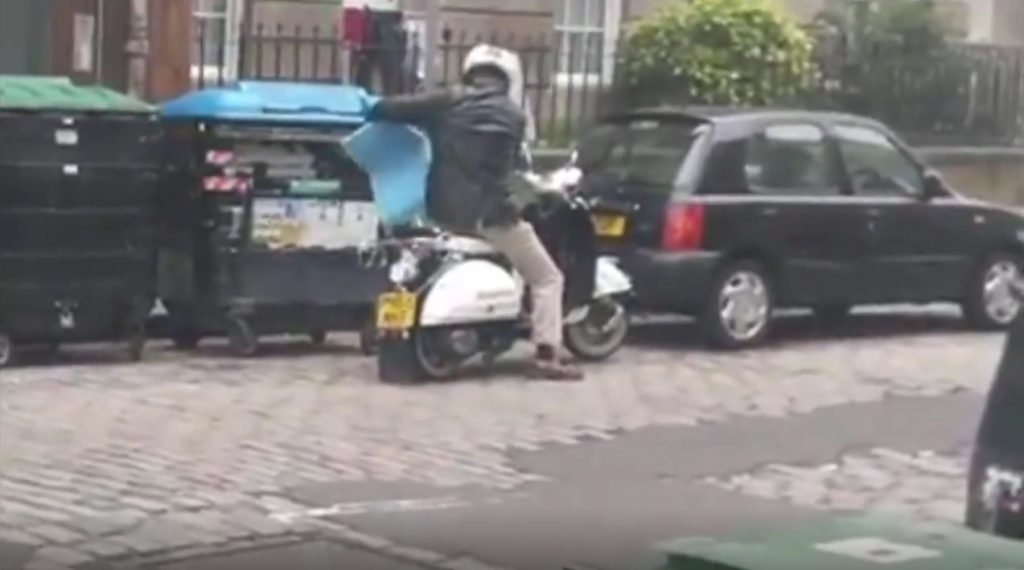 The man realises that he won’t be able to balance it without any assistance, so he takes the chair off again and retrieves some thin brown rope from the storage compartment underneath the bike’s seat.

He continues to struggle with the stool, placing it face down and then realising he would have nowhere to sit – he turns it around so he can sit on the back of the chair while riding.

Once he finally decides how he’s going to attach the seat, he starts to weave the rope between the legs of the stool and the back of his scooter frame.

After he’s satisfied the rope has been threaded through enough and attached a small padlock, he gives it a quick shake to make sure it’s secure.

Finally having the stool attached, he sets to head off – but his bike won’t start.

He tries multiple times, clearly frustrated, to get the engine to start – but with no luck.

He ends up having to push the scooter down the street.

Phil, from Kirkcaldy, Fife, said: “We were outside having a smoke when I saw him arrive, park up his scooter and go into the charity shop.

“When he came out carrying the stool and whatever else it was he had I just knew I had to film it.

“I’m used to seeing things like that in Thailand, even whole families on Scooters, but I have never seen anything like it over here.”

Diane McKenzie said: “Ten out of ten for sheer determination.”